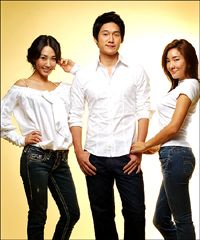 Based on the popularity of the film that attracted 6.62 million viewers in 2006, the much-hyped romantic comedy musical will follow the same storyline. But the genre being different, the musical differently portrays the highlight of the story in which Kang Han-byul _ the title role _ transforms from a more-than-200-pound woman into a slim and beautiful woman thanks to a plastic surgery.

Han-byeol has a gifted voice who dreams of becoming a singer but can't appear on stage because of her ugly figure, and instead dubs her voice for a prettier singer from behind the stage.

While singing backstage, she falls in love with Han Sang-jun, a music producer played by Song who highly appreciates her musical talent. To recover her confidence as a singer, she undergoes plastic surgery and becomes a famous singer with a totally different look, getting closer to Sang-jun as a top star. But as she becomes popular, she feels guilty about hiding the truth and finally reveals her secret to the public.

To portray her transformation, the musical uses special make-up designers such as renowned makeup artist Chae Song-hwa and magicians such as Lee Eun-gyeol and Choi Hyun-woo, along with specially designed stage sets, lights and costumes.

To ensure a successful performance, Broadway composer Tim Acito and stage designer Brian Prather were added to the creative team.

"It will be magic as she (Han-byeol) transforms into a gorgeous woman during one scene while a musical number is played", said director Kim Dong-hyuk. However, the production company has kept more details about the scene secret.

The musical will feature songs that were used in the film such as "Maria" and "Byeol".

The musical, which has been in preparation for the past two years, is also targeting overseas markets such as China, Singapore and Hong Kong.