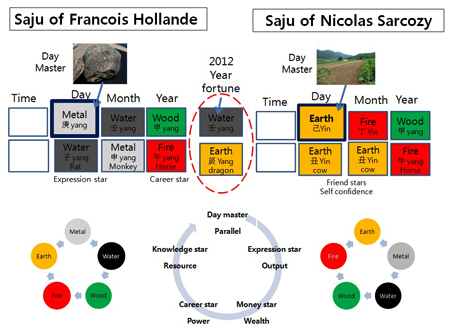 "How do you foresee the French presidential election, especially the chances of Nicolas Sarkozy?" I have been continuously asked to foretell the chances of many global candidates. Among them, I delivered a negative prospect about Sarkozy after reading his saju. Before long, it was reported that socialist Francois Hollande defeated conservative incumbent Sarkozy.

Here is the reason I came up with this reading.

Sarcozy was born with the energy of yin earth. Earth energy usually symbolizes harmony and balance. So earth people are fair and try to keep balanced. However we also need to observe other elements surrounding the earth day master. Since Sarkozy was born in the month of cold earth, his saju requires warmth. He has adequate fire energy in the month stem and year branch. This explains a great opportunity for glory. However, he must be careful and try to be humble because the earth elements are awash, being supported by the fire, knowledge star. He is apt to be overly confident and not to listen to others.

2012 is an earth year. When I read this year's fortune, I could foretell that additional earth energy is not at all favorable for his career path.

On the other hand, Hollande was born with the energy of yang metal. A metal day master is frequently seen in many leaders' saju. However he also has abundant water elements, which can intenerate the ruggedness of metal. Also the fire element in the year pillar is smelting the raw metal to make it a useful tool. He can be an iron hand in a velvet GLove, or tough in appearance but gentle in spirit. Contrary to the former reading of Sarkozy, the earth energy of 2012 is a fortunate factor to circulate the five elements in the saju of Hollande. The earth element denotes a knowledge star, which brings honor to the metal day master. However this saju shows he needs caution as the water energy can easily be brimming. Unnecessary water element rusts iron. He will be beset by different opinions in pursuing his pledges.

We will continue to see various elections to determine the leadership in several countries this year. South Korea had National Assembly elections last month and there is a presidential election in December. North Korea also experienced a regime change at the turn of the year following the death of former leader Kim Jong-il, even though his son became the successor. In March, Vladimir Putin took the presidential office of Russia. Elections in China and the United States are also scheduled this year.

2012 is the Year of the Black Dragon according to the classification of the Oriental zodiac and by the sexagenary cycle. People, born in 1952, 1964, 1976, 1988, 2000 and 2012 are all dragons. However each dragon year has a different propensity when combined with respective heavenly signs. Among 10 heavenly stems, only the yang elements can combine with the dragon. Accordingly, there are 5 distinctive dragon years. When the dragon is combined with yang wood, it is a blue dragon. If it is with yang metal, it is a white dragon. Other than the fact that the dragon is an imaginary creature, often appearing in myths and legends, it also implies a symbol of ruling power over the whole world.

When it comes to saju theory, the dragon, or "jin" out of 12 earthly signs, is relevant to change. The dragon or jin stands for the earth element and March in the lunar calendar. When it is converted to the solar calendar, it usually begins on either April 4 or 5. It is a good time for all creatures to grow and it includes appropriate moisture and some energy to sprout. If we investigate this sign further, jin includes both yin and yang elements, while most other earthly signs include either yin or yang. This is one major reason for its mystique. Ostensibly, it contains wood and water, on top of its own earth element, so it seems like omnific energy. Ironically, it is also a place to bury others like a graveyard. It arouses drastic or profound changes in history when it is seen in yearly fortune. The same applies to human destiny, when it is in one's saju.

It will be intriguing watching the results of elections around the world, in reference to this year's fortune and individual candidates' saju.

Information: Are you interested in learning more about the ancient Chinese teaching about the "Four Pillars of Destiny?" For further information, visit Janet's website at www.fourpillarskorea.com, contact her at 010-5414-7461 or email janetshin@hotmail.com.

The writer is the president of the Heavenly Garden, a saju research center in Korea, and the author of "Learning Four Pillars".

"(188) 2012 - a year of elections"
by HanCinema is licensed under a Creative Commons Attribution-Share Alike 3.0 Unported License.
Based on a work from this source