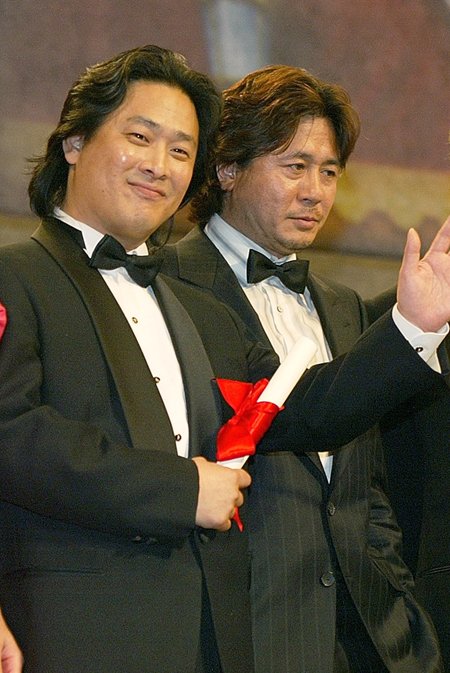 Director Park Chan-wook, left, waves as he is awarded with actor Choi Min-shik for the grand prix for the film "Old Boy" during the award ceremony of the 57th Cannes Film Festival in Cannes on May 24, 2004. / Korea Times file

Tension and violence sell, but this may not be apparent to the vast majority of fans of "hallyu", the much-discussed "Korean Wave" of pop culture that has swept outward from the shores of the peninsula since, roughly, the turn of the millennium.

The two standout genres of hallyu, in sales terms, are clearly K-pop and K-soaps. Of the former, Korean management companies have come up with a winning formula, churning out a range of cute, well-trained and above all wholesome boy- and girl-bands whose appeal is very different from the rebellious, opinionated, drug-spattered figures who stagger across the stage of Western rock 'n roll. Soap is similarly sugar-coated: Most dramas are centered upon pretty boys and pretty girls in pretty clothes and pretty houses/landscapes engaging in genteel, "no-sex-please-we're-Korean" romances.

Clearly these two genres speak to Asians: Hallyu has generated a massive wave of positive equity for Korea's national brand across the continent, making Korea (arguably) the coolest country in the region.

But ― despite hopeful hype in the vernacular media to the contrary ― neither has won significant critical or commercial success in the West. To date, Korean pop artists have had no more luck scoring Billboard Chart hits in the United States than Korean soap operas have had in winning prime-time television viewing slots from Western Europe broadcasters. 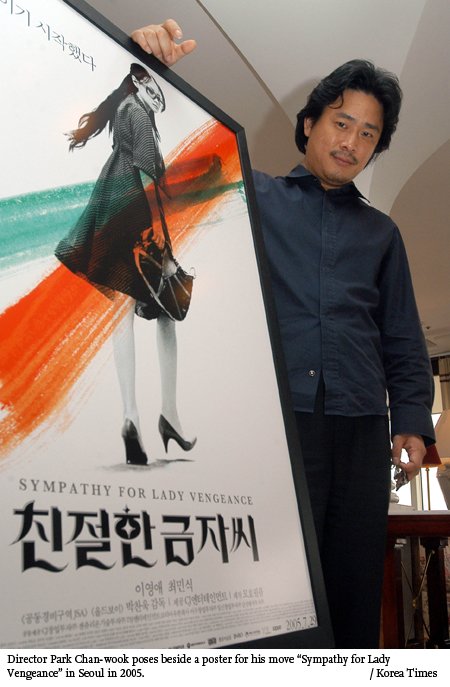 However, the third arm of hallyu ― Korean film ― is on the cutting edge. Unrestrained by the fluffy-but-strict parameters that cage K-pop and K-soaps, new-generation Korean cinema has had no qualms in presenting spectacles that challenge audiences, embrace risks and shatter taboos.

Of the new generation of Korea auteur, none is more avant garde in his mastery of the cinema of tension and violence than Park Chan-wook. Park's "Vengeance" trilogy has done what no K-popster or K-soap has yet managed to do: Break beyond Asia and win both critical and popular acclaim among Western audiences.

Park was born in Seoul in 1963. While a philosophy major at Sogang University, he ran a cinema club and wrote on film. After graduating, he entered the industry, working as an assistant director, before moved up to direct his first feature, "The Moon Is... the Sun's Dream" in 1992, followed by "Trio" in 1997. Neither made enough of a splash to permit him to make a full-time living as a director, forcing him to write as a film critic to make ends meet. His next feature would change that, dramatically. 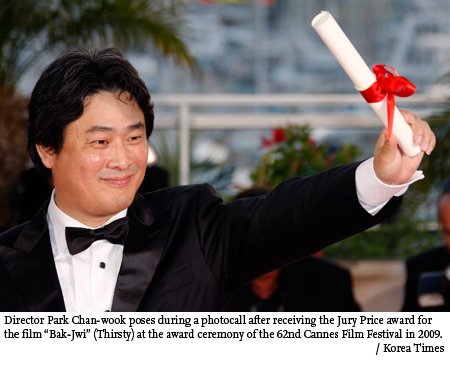 "JSA - Joint Security Area" exploded across screens in 2000. Released at the height of hopes for President Kim Dae-jung's bold and unprecedented "Sunshine Policy" of engagement with North Korea, it was perfectly positioned to capture the zeitgeist. In common with the previous year's North-South auctioneer "Shiri" it did indeed, portray what had been rarely seen before on Korea screens: Well-defined and sympathetic North Korean characters.

That, however, did not explain "JSA - Joint Security Area"'s success. Based on a novel, it was a tautly plotted thriller about two pairs of South and North Korean soldiers who, stationed near the infamous JSA, the tense truce area in the middle of the demilitarized zone between the two nations, forge a dangerous amity. Working via a non-linear storyline, the film brilliantly blends the pathos of characters from a divided nation becoming acquainted with a mounting tension as their forbidden friendship spawns its inevitable tragic consequences.

Starting with a laid-off man attempting to obtain a kidney transplant for his terminally ill sister, it careens off into left field with organ trading gangs, kidnapping and terrorism. Stunningly shot, gruesomely violent and spiked with moral conundrums ― Do evil means justify good ends? ― it was a hit in Korea but only gained niche visibility in the United States. 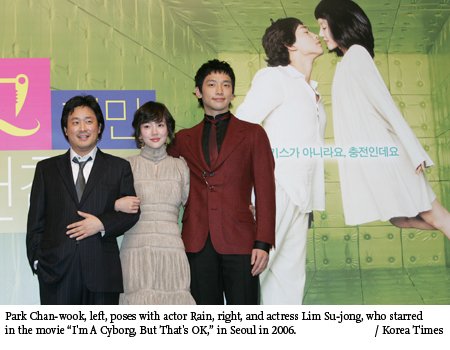 Park's international profile would soar with his next film, "Old Boy". Based on a Japanese manga (comic book), the central idea of this 2003 film is compelling in its simplicity: A man is locked up in a shoddy motel room for 15 years with no idea why. When he is suddenly released, with no explanation, he swears to track down his tormentors and deliver bloody vengeance. Noted for both its action set pieces and a brilliant central performance by Choi Min-sik, it was voted by CNN viewers one of "The Ten Best Asian Films of All Time;" the BBC called it "a sadistic masterpiece". Its greatest tribute, however, came from the enfant terrible of action cinema himself.

American filmmaker Quentin Tarantino had been deeply impressed by "JSA - Joint Security Area" and was blown away by "Old Boy", a film closer to his own oeuvre in both style and subject matter. As the head of the Cannes Film Festival Judging Panel in 2004, he reportedly lobbied for "Old Boy" to win the Palme D'Or, the festival's top prize; it eventually won the Grand Prix, the number two gong, that year. An American remake is reportedly in the works; Spike Lee has been named as a possible director.

Park obviously had a winning formula. He topped off "Old Boy" with the third film in his loose "Vengeance Trilogy", 2005's "Sympathy for Lady Vengeance". This featured a kind-hearted and beautiful young woman leaving prison after being unjustly jailed for a murder she did not commit and dedicating herself to tracking down the real killer. In what was, perhaps, an effort to top the shock grade of his earlier films, Park makes the villain in this one (Choi Min-sik, the wild-looking protagonist from "Old Boy") a child murderer and producer of snuff films.

Like its predecessors, "Sympathy" was beautifully, if gruesomely framed and filmed. While acknowledging the vengeful emotion many parents of murdered children may feel, "Sympathy's" dark climax has a strong suggestion of Nietzche ("He who fights demons must beware, lest he thereby becomes a demon himself"). The film netted three awards at the Venice International Film Festival in 2005, and Park was invited to join that festival's jury the following year.

"Old Boy" created an audience for both its prequel and its sequel; the three films have since been released internationally in a boxed set, and are frequently discussed together. Some may recoil from their graphic sadism, but their ferocious power is undeniable, and what raises the "Vengeance" trilogy beyond those of most contemporary auctioneers is that Park acknowledges and shows the results of violence, rather than using it simply as a cinematic device to leverage excitement.

Since "Sympathy", Park has made a range of award-winning films. His "I'm a Cyborg, But That's OK", a quirky romantic comedy set in a mental institution, won the Alfred Bauer Price at the Berlin Film Festival in 2007; his vampire film, "Thirst" won the Jury Prize at Cannes in 2009; and his horror short "Night Fishing" (2011) - shot entirely on an I-phone ― won the Golden Bear award in Berlin in 2011 for Best Short Film. For his latest project, Park has looked further afield.

Korean actors Rain, Lee Byung-hun and Jang Dong-gun have all fared far less well in Hollywood than in Chungmuro. In 2011, Park ― who, among all Asian directors, has name value thanks to "Old Boy" ― dipped his toe into American waters with his English-language debut. "Stoker" a horror movie starring Nichole Kidman, is reportedly in post production. How it fares remains to be seen, but if Park seizes full artistic license and overcomes Hollywood convention, the film will no doubt be fascinating.

Speaking more generally, Park has continued to make interesting, quality films, but thus far, none of his subsequent works have managed to re-capture the Hitchkokian tension that animates "JSA - Joint Security Area", nor generated the shockwaves that his "Vengeance Trilogy" spread worldwide.

While members of Korea's fine arts community may well question whether blood-spattered revenge flicks are in any way an appropriate representative of modern Korean art, there can be no question of Park's global influence any more than they can be of the perplexing popularity of violent films. "Old Boy", ― and to a lesser extent, the other two movies in the trilogy ― are firmly embedded in the cult of noir cinema worldwide.

That ― plus the international honors showered upon him ― makes Park one of the most influential and iconic Korean artists of our time.

Andrew Salmon is a reporter and the author of three works on modern Korean history ― "U.S. Business and the Korean Miracle: U.S. Enterprises in Korea, 1866 - the Present", "To the Last Round: The Epic British Stand on the Imjin River, Korea, 1951", and "Scorched Earth, Black Snow: Britain and Australia in the Korean War, 1950".

"(42) Park Chan-wook: Director with blood-coated lens"
by HanCinema is licensed under a Creative Commons Attribution-Share Alike 3.0 Unported License.
Based on a work from this source