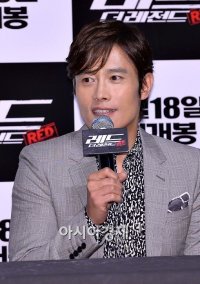 Celebrities are always hounded by those trying to dig up scandals and personal affairs. Some of these stories may be matters of interest, but others may ruin a person's integrity and cause them to stop their public activities.

Celebrities can enjoy wealth, fame and adoration, but all these can disappear with just one bad scandal. Some celebrities barely survive such turmoil while others may disappear from the public eye.

As usual, many celebrity scandals were exposed this year whether we want to hear them or not.

Continuing on the theme of last week's article, the saju of Tiger Woods, this week focuses on Lee Byung-hun, who is also embroiled in a scandal.

Lee, a "hallyu", or Korean Wave, star who appears in the KBS drama "IRIS", may have to go to court to defend himself against a lawsuit. The lawsuit was brought by a 22-year-old woman, a Canadian-Korean rhythmic gymnast, for damages from Lee's alleged false promises of marriage.

After meeting in Canada in 2008 during a promotional tour for the movie "The Good, the Bad, the Weird", the two continued to keep in contact through phone calls and e-mails after Lee returned to Korea. The gymnast, known by her family name, Kwon, even visited Korea to spend some days at Lee's house. As Lee allegedly promised to provide financial support for Kwon's studies and gymnastics career, she moved to Korea. But, according to Kwon, Lee had a change of heart and stopped his financial support. There were also claims regarding Lee's habitual overseas gambling, which his agency, BH Management, denied. The scandal has taken an interesting turn after photos of Lee and Kwon surfaced.

Lee released a statement on his Web site defending himself, saying he was "deeply saddened that something which was supposed to be left as pleasant memories has been polluted with fabrications of the truth". He remained confident of winning the nasty legal battle.

Lee's representative released a statement to acknowledge that Lee had dated Kwon from last autumn until this spring but said he had not done anything "reproachable". They said they will take proper legal action against Kwon's lawsuit.

According to saju theory, the "love" fortune is explained by the money star while administrative issues, such as lawsuits, are explained by the career star (power factor). Before we start reviewing Lee's saju, let's review the five stars of saju first.

Once we open the saju from one's birth year, month, day and time, we need to confirm the day stem as a day master. 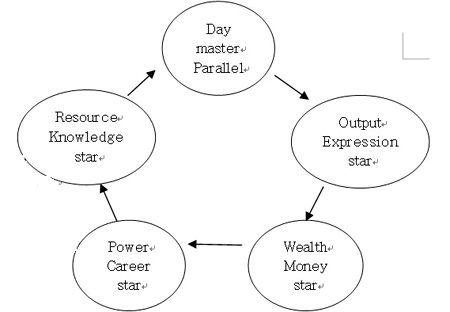 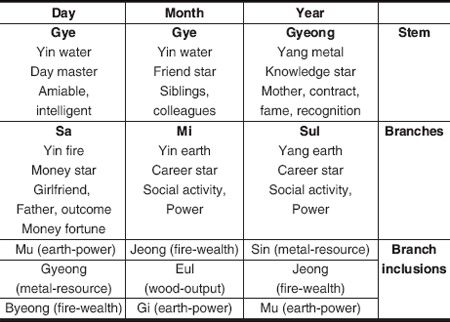 He was born with the energy of gye water (black), which signals an amiable, flexible and intelligent person. Then the second thing we have to see is the month branch, which is mi earth (brown), and the career star.

In his year stem, Lee has the knowledge star (gyeong), which takes healthy roots in the "sa" of the day branch and the "sul" of the year branch.

Now, you will see what makes this person strong and which life goal he is pursuing.

Let's get a little more specific.

Lee has many money stars (fire-red) in each branch. So although he seems to have a strong career star, his money star is also very strong. This means an intricate relationship with the opposite sex underlies his fate.

Going back to this year's fortune, as we learned, three earth elements of chuk-sul-mi, creates certain penalties. For Lee, the earth element signifies certain administrative issues, so it seems it may be difficult for him to get out of the lawsuit troubles. But, this does not mean that he may have to stop or reduce his social activities. He will end theses troubles and be able to resume them as an actor.

The writer is the president of Heavenly Garden, a saju research center in Korea. She is the author of "Learning Four Pillars". She offers saju courses to all who are interested. For more information, visit her Web site (http://blog.naver.com/janet―shin)

"(72) Saju of Actor Lee Byung-hun"
by HanCinema is licensed under a Creative Commons Attribution-Share Alike 3.0 Unported License.
Based on a work from this source