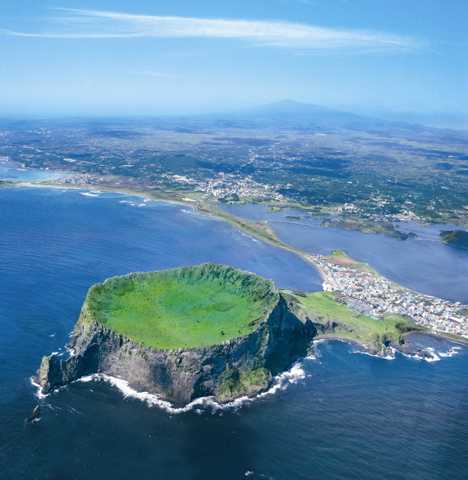 Jeju Island's recent selection as one of the New7Wonders of Nature was legitimate, Governor of Jeju Special Self-Governing Province Woo Keun-min said Monday.

He said the provincial government did not engage in any irregularities when campaigning for the designation. In a press conference at the governor's office in Jeju city, Woo argued there was nothing wrong with Jeju's designation as one of the world's new natural wonders.

"I have nothing to hide in the island's winning of the selection. I heard a civic group asked the Board of Audit and Inspection to investigate the matter. Then, so be it. I will face any inquires resolutely", the governor said.

Critics have argued that the worldwide poll to select the world's new seven wonders was nothing more than a scam orchestrated by the Swiss-based organization New7Wonders Foundation.

They said the foundation organized an international contest only to earn money by persuading a number of tourist destinations, including Jeju Island, across the globe to participate in the race.

The worldwide poll kicked off in 2007, with the central and Jeju provincial governments encouraging millions of Koreans and non-Koreans at home and abroad to make phone calls to vote and help the island win over the past four years. Those who voted for Jeju did so online at www.new7wonders.com or by making a phone call to 1588-7715. Each call cost 180 won.

Critics insist that tens of billions of won generated by making hundreds of millions of phone calls all went to New7Wonders Foundation via KT, the country's largest landline phone operator. They also said the Jeju provincial government made numerous calls, wasting taxpayers' money.

On Feb. 9, the provincial government revealed that it spent a total of 21.2 billion won ($18.9 million) in taxpayers' money over the past four years to make international phone calls to ensure the southern resort island was selected.

It then said it used 8.15 billion won in emergency funds to make the payments, on top of a regular budget allocated for telephone and other communications-related expenses.

However, Woo claims there was nothing wrong with diverting emergency funds to pay for phone calls made by employees.

"Reserve funds can be spent at the governor's discretion as long as they are not used to either pay for entertainment expenses or provide subsidies to private organizations. It was legitimate to pay phone bills with the fund", he said.

The governor then expressed concerns over a series of recent media reports raising doubts about Jeju's selection.

"I think Jeju's winning is a nationwide achievement. Spreading unfounded rumors about it does not do any good at this point. Now is the time for all Koreans to join hands to promote the island as one of the world's top-class tourism destinations and turn it into a jewel in Northeast Asia", he stressed.

"'7Wonders selection process fair'"
by HanCinema is licensed under a Creative Commons Attribution-Share Alike 3.0 Unported License.
Based on a work from this source