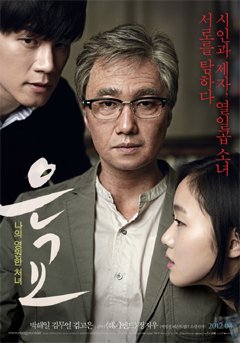 "A Muse" has been selected as the opening movie for the fifth Seoul Senior Film Festival. The organizers described it as a movie that helps viewers of all ages gain a deeper understanding of old age. They expect it to t ouch the hearts of audiences from different generations.

The film, dubbed the Korean version of "Lolita", tells the story of a 70-year old poet who goes through emotional trouble after falling for a 17-year-old girl.

Leading actor Park Hae-il also served as a promotional ambassador for this year's festival, which will be held at Daehan Cinema in Chungmuro, Seoul from Oct. 22 to 25.