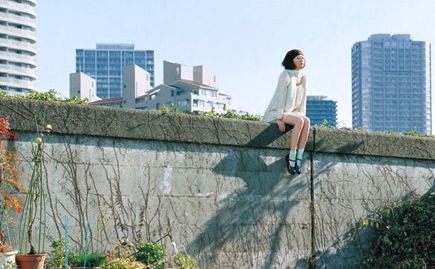 We've seen sentimental robots and other such non-human characters teach us lessons about humanity. Now a sex toy comes to life in a film which ― despite the rather "decadent" origins of its subject matter ― ultimately brims with childlike innocence and leaves a poignant sting.

Directed by Hirokazu Koreeda, the film had been invited to prestigious film festivals including Cannes and Pusan (Busan) last year. It drew rave reviews from Japanese critics and the audience alike, and South Korea's quirky actress Bae Doona picked up several Best Actress awards for the title role.

In her second Japanese project after "Linda Linda Linda" (2006), Bae captivates the viewer as a life-size doll that develops a soul ― as is with solid fantasy tales, the implausible "why" and "how" bits are of little importance.

A frustrated middle-aged waiter (Itsuji Itao) finds Solace in his beloved "companion" Nozomi (Bae). But unlike the delusional protagonist of "Lars and the Real Girl" he is completely aware that Nozomi is well, not really real, even though he cares enough to take her for a stroll in the park and such wearing matching outfits.

One day our inflatable protagonist wakes up and starts to feel everything around her. The transformation from an actual plastic toy to the flesh-and-blood Bae, is most natural, as the doe-eyed actress blinks and moves convincingly like a real doll.

After her owner leaves the house for work, she dresses up in her favorite French maid outfit and begins to explore the neighborhood, learning the basics of human interaction and also picking up Japanese words here and there.

Nozomi ends up at the local video store and her breath halts the moment her eyes fall upon the store clerk Junichi (Arata). She has yet to define the heart-stopping emotion she feels, or even learn what a movie actually is, but this isn't a problem as she is accidently hired to work at the store.

Nozomi thus begins to lead a double life as curious quasi-human by day and a lust-fulfilling, lifeless doll by night. She begins to blend in better as she learns how to apply makeup ― covering up all signs of her inflatable-ness ― and shop for more ordinary clothing. Moreover, she begins to exhibit human virtues and vices: "I have a heart now, so I lied", she says to herself after saying that she doesn't have a boyfriend.

Nozomi and Junichi spend more and more time together, and our lovely heroine sparkles and shines in the warm attention of the initially stolid young man. Her true identity, however, is compromised when she gets a cut, and starts deflating, while organizing DVDs. Will Junichi be able to accept who ― or what ― she really is?

The film provides an intimate look into modern illnesses such as self-imposed alienation, as well as the easily overlooked charms of everyday life, through an innocent yet all-knowing pair of eyes. Nozomi's open heart detects all the beauty and the filth around her, and the lovely mise-en-scene nimbly captures the process, maintaining a certain distance without missing the fine details.

Fans of Japanese cinema can look forward to the short yet impressive appearance of heartthrob Jo Odagiri.

Now showing in theaters. 18 and over. In Japanese with Korean subtitles. Distributed by CJ Entertainment.
__________________
South Korean actress Bae Doona stars as a blow-up sex doll that develops a soul one day and explores what it means to be human in the critically acclaimed Japanese film "Air Doll". / Courtesy of CJ Entertainment

"'Air Doll' Leaves Poignant Sting"
by HanCinema is licensed under a Creative Commons Attribution-Share Alike 3.0 Unported License.
Based on a work from this source