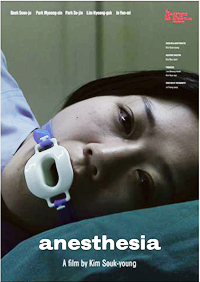 A poster of film "Anesthesia"

The second film by 28-year-old Kim Souk-young, a student at the Korea National University of Arts, has been invited to this year's Berlin International Film Festival, the university announced Tuesday.

"Anesthesia" was made last year during the filmmaking department's intermediate-level workshop and received a positive response from the audience at the 16th Busan International Film Festival last October. It entered the Korean Short Film Competition 2 in the Wide Angle category as well as at the 37th Seoul Independent Film Festival last December.

"The movie was inspired by the news (I read) on the Internet, but 'Anesthesia' has a greater meaning as a story", said Kim, in a written statement, "I wanted to show different ways people respond to injustice in society.

"More than anything I wanted to encourage myself with this work", she added, "that I must be unafraid to stick to my choices even in times of hardship".

The movie follows the reactions of nurses after they find out their director has been sexually assaulting patients under anesthesia.

Five Korean films have entered the 62nd Berlinale, including Kang Je-gyu's "My Way" and Jeon Kyu-hwan's "From Seoul to Varanashi" in the Panorama category, and Lee Han's "Punch" in the Generation 14plus section.

The festival opens on Thursday.

The writer is a Korea Times intern.