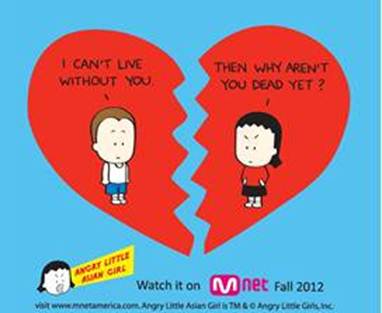 Angry Little Asian Girl, is an animated series based on Lela Lee's "Angry Little Girls" series of comics, books, t-shirts, bags, and other products with a rabid cult following. ALAG will premiere October 26 and some episodes will feature special guest star Margaret Cho as Kim's mother.

"This Fall has some of the most exciting programing we have ever created", said Ted Kim, acting president & CEO of Mnet. "With Angry Little Asian Girl coming to life and YTF making its well-deserved jump into television, Mnet continues to move forward in our mission to provide original series that brings the best of Asian Pop culture to our viewers".

ANGRY LITTLE ASIAN GIRL – Imagine "South Park" with an Asian attitude. Angry Little Asian Girl is an animated series that follows Kim (and her quirky immigrant parents) as she tries to navigate life in a blonde, blue-eyed suburban neighborhood filled with ignorant adults, annoying friends, dim classmates and a dumb boyfriend, all of which makes Kim quite angry!

DANNY FROM LA – Superidol and K-pop icon, Danny (also known by his Korean name Taebin), of the Korean hip hop group 1TYM, will be the host of Mnet 's brand new show, Danny From LA. This exciting new program will be a weekly half-hour show that features popular Asian music, culture and media content for all viewers. The show will be presented on TV and online, but also available as a radio broadcast and podcast. Each week, Danny and his co-host will speak with special guests, including idols, artists, actors, actresses and other top personalities. They'll be discussing behind-the-scenes info, his experiences as an idol, what's happening in popular media, and other topics from the off-beat to fascinating. Danny from LA premieres September 13.

KOLLABORATION – With a mission to empower Asian Americans through entertainment, the talent show Kollaboration has expanded from one show in Los Angeles to now 15 shows across North America. This year Mnet has the special chance to follow the tour as they choose the best young Asian American talent to join them for the final show in Los Angeles and have the chance to be crowned the winner. Start following all the drama and excitement when Kollaboration premieres October 18.

YTF – YTF aka Yesterday Today Forever, takes seven of the biggest YouTube celebrities and unites them to create THE COLOSSAL Asian American Entertainment Group. The crew, Ryan Higa, Kev Jumba, Chester See, Victor King, D-Trix, and Andrew Garcia, together have over 1.2 billion fans and have put together a concert series, where they travel from coast to coast, singing, dancing and doing sketch comedy all while carrying their own unique hip, wholesome vibe. YTF premieres September 12.

"'Angry Little Asian Girl' to Make TV Premiere October 26 on Mnet"
by HanCinema is licensed under a Creative Commons Attribution-Share Alike 3.0 Unported License.
Based on a work from this source