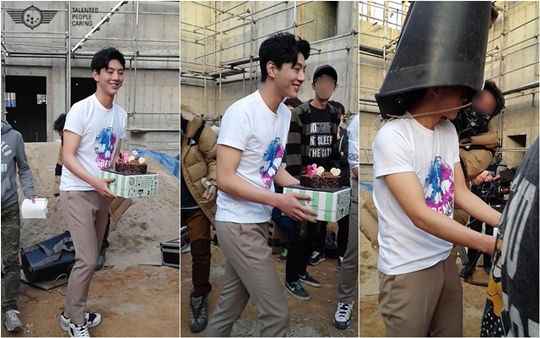 In the revealed photos, Ji Soo looks delighted holding his birthday cake with two hands. He also was being goofy using a black bucket as his birthday hat. His playful gestures brought such warmth to the filming set.

His bright smiles and sweet eyes were contrary to those of his dominant and charismatic character in the drama.

Ji Soo was fully touched by the surprise birthday party prepared by the production team and the staff members. Their heartfelt birthday wishes made him absolutely happy.

Ji Soo plays Go Bok-dong, a school gang member and the 'power' in the classroom in "Angry Mom". He has been making a strong presence delivering great acting performances unlike a rookie actor.

"'Angry Mom' actor Ji Soo gets delighted with surprise birthday party on the set"
by HanCinema is licensed under a Creative Commons Attribution-Share Alike 3.0 Unported License.
Based on a work from this source