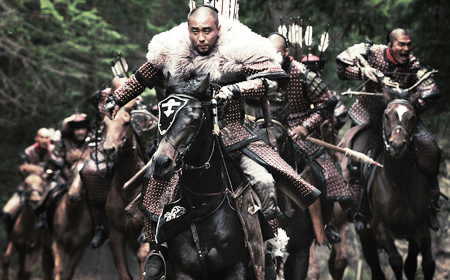 A scene from "Arrow, The Ultimate Weapon"

The filmmakers and actors of summer blockbuster "Arrow, The Ultimate Weapon" are confident bows and arrows can entertain just as much as guns and bullets.

At a promotional press event on Tuesday in Seoul, the film's director Kim Han-min ("Hand Phone", 2009) said he felt as a child "a visceral pleasure" from using the traditional weapon, which he "hoped the audience will share with this movie".

A fictional tale set in the Joseon Kingdom (1392-1910), "Arrow" follows Nam-i (Park Hae-il) on his search for younger sister Ja-in (Moon Chae-won) and her fiance Seo-gun (Kim Moo-yul) after they are kidnapped by Chinese Qing Dynasty soldiers during an invasion.

As he slays enemy soldiers with his bow and arrow, he is confronted by Jushinta (Ryu Seung-ryong), an enemy commander also well-known for his archery prowess.

The filmmakers stressed the importance of sound design to produce the chilling effects of the high-speed weapon and hope the audience would be able to tell the difference. 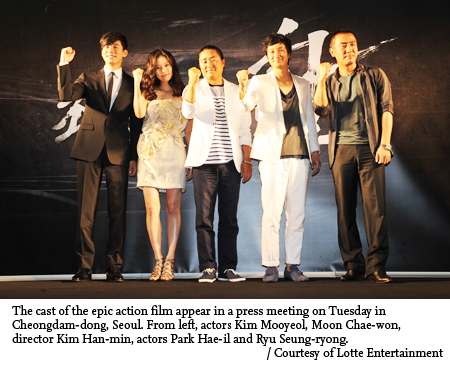 The computer effects notwithstanding, the point of attraction is going to be the actors' craft, for which the director reserved the highest praise.

"Strangely, the characters that I pictured in my head and my scenario did not change at all", the director said. "I wanted these cast members from the beginning, and I feel very lucky to have them work with me".

Ryoo, a seasoned actor who was last seen and unequivocally praised for his role in the Korean drama "Personal Preference", appeared charismatic and at ease in the villain character, the most imposing presence even in a split-second teaser.

After viewing the clip at the event, Ryoo joked that he looked very "stylish" but did not forget to pay a tribute to "his" soldiers in the movie.

Returning to the silver screen following the successful "Moss" (2011), Park was said to be nervous about his first attempt at a period piece.

"My wish all along the shoot was to have a 'refreshing' movie for the summer", he said, explaining his hopes of having a chilling effect on the audience.

"Arrow" made headlines in May, when it was featured at the Cannes Festival film market and ended up selling to distributors from six countries.