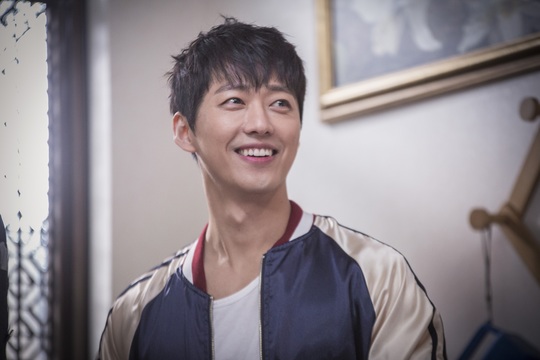 Namgoong Min's rom-com is being revealed.

Namgoong Min will play the handsome guy in the block, Ahn Dan-tae, a man of justice contrary to his appearance in SBS' new weekend drama, 'Beautiful Gong Shimt'.

During the last script reading sessions and poster shooting on April 13th and 15th, Namgoong Min perfectly transformed into the pure-hearted man with such sweet gaze in his eyes when interacting with Bang Minah, who plays Gong-sim, the female lead.

What could be the reasons why Namgoong Min chose a romantic comedy drama for his next appearance, while he has always been presenting intense characters?

Namgoong Min said, "I've made the decision based on the trust for director Baek Soo-chan with whom I've been in friendship since 2002 as well as the writer Lee Hee-myeong with whom I've worked well together for 'The Girl Who Sees Smells' and "I thought 'Beautiful Gong Shimt' would be the best fit for my idea that I would want to pull off any character as an actor in a drama with a good content collaborated by a good director".

As Namgoong Min said, "I've never given up on my own trust for myself and kept trying hard", he finally could have his name recognized by the public clearly and he even has challenged with his new endeavors to write a screenplay for a movie and directing.

Because of his personal experience, Namgoong Min can immerse himself into his character Ahn Dan-tae perfectly, who is just and witty under any tough circumstances.

Namgoong Min says, "I believe an actor gets to experience a life playing his or her role in dramas and movies. Going through a good guy character to a bad guy character and all sorts of other characters, I've become myself who I am now" and "By the time this drama has finished, I think I would have become a manly and large-minded person. I ask all of you please to send us much love and support for this drama full of the positive and pleasant energy by Dan-tae".

"'Beautiful Gong Shim' Namgoong Min Min says, "The late bloomer character resembles me""
by HanCinema is licensed under a Creative Commons Attribution-Share Alike 3.0 Unported License.
Based on a work from this source