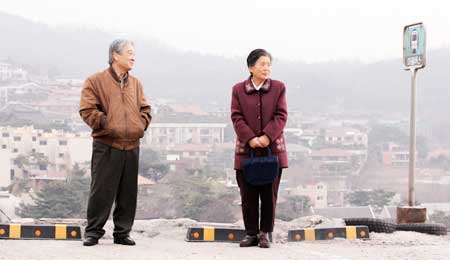 A scene from the film "Late Blossom"

Elderly people are often excluded from big and small screens dominated mainly by the portrayal of romance between young couples. However, the new movie "Late Blossom" features the love of four people in their twilight years, based on a hit Internet cartoon by Kang Full.

The movie is a definite tearjerker. The press conference of "Late Blossom" was delayed a few minutes because actress Kim Soo-mi, who plays Cho Sun-i in the film, cried so much that she had to redo her makeup.

The movie revolves around four senior citizens living in a hillside village. Kim Man-seok, played by veteran actor Lee Soon-jae, is a milkman who wakes the village early each morning with his noisy, battered motorcycle. He meets Song (Yoon So-jung), who scavenges for scrap paper while roaming around the town at daybreak. As they meet again and again, they slowly develop feelings for each other.

Song parks her handcart at a junkyard and sees Jang Gun-bong (Song Jae-ho), the caretaker of the parking lot next to the scrap yard. One day, Jang wakes up late and forgets to lock his door and asks Song to fasten it for him. Meanwhile, Jang's demented wife Cho wanders around the town, ending up on the back of Kim's motorbike. 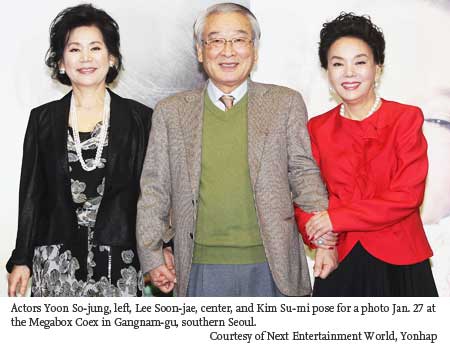 Often, these older, veteran actors appear in supporting roles in television soap operas or movies these days. But "Late Blossom" makes the most of their talent in bringing to life this love story in the most natural way.

The original cartoon, titled "I Love You" in Korean, was serialized online in 2007 and later published in three volumes. In 2008, the cartoon was turned into a play and drew audiences of more than 120,000 by 2010.

"I started the cartoon doubtful of its success, as it told a story about old people, not young, good-looking men and women. However, the response was greater than I expected and it broadened the prospect of my works", the web cartoonist said in a press release.
Actor Lee said this movie was a rare chance for him and other senior actors to play leading roles on the big screen.

"Young people might be under the illusion that life is over after turning 60, but the heart doesn't change despite getting old", Lee said. The actor added that the elderly population in Korea has surpassed 5 million. "Not understanding their feelings would be a failure of television dramas, movies and even elections", he said.

Yoon said, "I realized that I should love from the heart, not the head. This is a beautiful movie and I thought I should make such a film at least once in my lifetime". She also said she had respected Lee for a long time and it was a pleasure being his partner in the movie.

Song said Jang is a romanticist who perseveres with the pain of his wife's suffering. "All he knows is his wife. She is everything to him. I think Jang's character is similar to my personality", he said.

Kim, who plays a character, with Alzheimer's, said she was impressed by the way elderly love was portrayed in the film. "In the movie, Kim saves embracing Song until the end of their love. It was stronger than a one-night stand between a young couple", she said.

Popular younger actors starred in supporting roles. Song Ji-hyo appears as the granddaughter of Kim, while Oh Dal-soo plays a junk dealer who does business with Song.

"Late Blossom" is in theaters from Feb. 17. Distributed by Next Entertainment World (NEW).

"'Blossom' portrays love in twilight years "
by HanCinema is licensed under a Creative Commons Attribution-Share Alike 3.0 Unported License.
Based on a work from this source