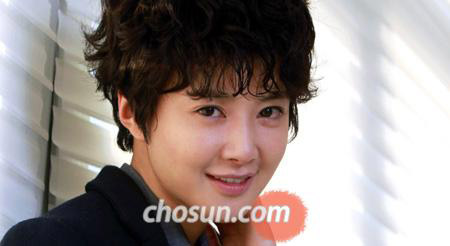 Since debuting four years ago, actress Lee Si-young has scaled impressive heights in her acting career and played lead roles in numerous hit TV dramas and movies. In the new KBS TV drama "Wild Romance", which began airing recently, she again finds herself the star of the show as a bodyguard tasked with protecting a baseball player who has received death threats.

"I had my long hair cut short to better suit the role of this tough character", Lee said. When asked whether it was hard to act in another action drama after just wrapping up the soap "Poseidon", where she played a Coast Guard commando, Lee said the role had made her more interested in seeking out similar kinds of characters.

"I became very interested in action dramas", she said. "In "Poseidon", I felt my limitations in playing such a role, so I want to challenge myself with more action roles to develop my skills".

"I don't see many actresses who are good at tough action roles. I hope I can fill the gap".

Last March, Lee made headlines by winning the National Amateur Boxing Championships in the 48 kg class, making a name for herself as a "boxing actress".

"I got into the sport after playing the part of an amateur female boxer in a soap on MBC. I kept it up as a hobby and was told that I had got potential, so I trained really hard", Lee said. "Boxing changed who I am. I became more honest and extroverted, with more confidence in who I am", she said.

When asked why she declined to do interviews about her boxing after winning the tournament, Lee said she became concerned about all the attention she was receiving. "I'm an actress and I became worried that I wouldn't get to play any decent roles again if the boxing got too much attention", she said.

How does she feel about the low ratings "Poseidon" received, as well as the fact that "Wild Romance" is also not posting stellar ratings? "I would not be telling the truth if I said I didn't feel any pressure", Lee said. "But I'm giving it all I have and trying to enjoy the experience, so I think things will work out".

"'Boxing Actress' Lee Hopes to Take on More Action-Packed Roles"
by HanCinema is licensed under a Creative Commons Attribution-Share Alike 3.0 Unported License.
Based on a work from this source