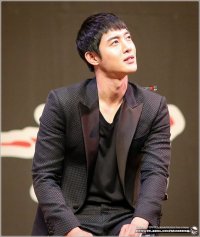 While heading to the film set of the hit KBS 2TV drama "Boys over Flowers" last month, Kim suffered a car accident near the downtown Cheonggye Stream area. Kim cited waist pain at the time and the hospital advised him to check in but, due to tight shooting schedule, he delayed treatment until after the drama is over at the end of March.

His management agency said, "Kim's waist pain is continuing, so when the drama is over, Kim will clear his schedule and rest in a hospital for a month. His band, SS501, was scheduled to release a regular album in April in Japan, but it has been put off until May. After the drama, he also needs to shoot several TV commercials, so we adjusted his schedule to provide for sufficient rest".

The agency added that Kim's recent collapse during the Macao shoot was due to long hours of shooting without having proper regular meals, resulting in a gastric ulcer.