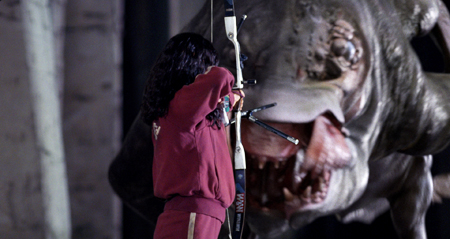 A scene from "The Host" by director Bong Joon-ho. Bong as well as other directors and their films are featured in the book "Cine Class", an introductory guide to Korean film. (Korea Times film)

Film as a medium is much like language ― it performs many of the same functions of communication. From opening to ending scenes, films are full of signs, codes, episodes and stories directors want to show and tell. To better understand the language, one needs to have a basic knowledge about moviemaking.

scenes and sounds of movies. As people have their favorite genres, directors and actors, they can enjoy films in individual ways, leaving the parts difficult to understand behind.

Sometimes, moviegoers have opportunities to listen to directors explain their work and those accounts, in most cases, can help achieve a better understanding.

A movie may not be fully understood and this isn't always necessary. Still, a basic knowledge of filmmaking may guide viewers into a deeper and broader appreciation of what they are watching. It will also amplify the joy of watching.

Though people think they know a lot about movies, they actually might lack some basic knowledge. This book, co-authored by Ham Choon-sung and three other professors teaching film studies at universities, is designed to help fill the gap.

Most universities these days have courses on movies and many other film-related curricula. However, it's not easy to find textbooks that satisfy both teachers and students. The authors wanted to write such a book.

"This book is written for those who have an interest in movies, who want to know more about movies and who want to love movies more but who feel burdened about reading too technical and too specific terms about films", Ham says in the preface.

Written in plain words and leaving out overly technical or tedious professional content, this book is easy to read and enjoyable for not only students majoring in film but others as well.

The co-authors wanted to give readers a chance to look at movies not only from within but from outside, meaning it seeks to help them deepen their comprehension of films themselves and at the same time expand their knowledge about the relationship between movies and society.

"Cine Class" is different from other introductory film books in many aspects. For instance, it didn't cover the history of movies. It distances itself from other stereotypical textbooks overflowing with jargon and industry facts in a chronicled way.

Comprised of 12 chapters, this book is abundant with photos from movie scenes to better illustrate examples. Many well-known Korean films were used as samples. Readers will be able to become familiar with elements they missed in box-office movies made by Bong Joon-ho, Hong Sang-soo and other directors.

From camera work and editing to criticism and the future of film, the book covers almost all aspects. Constructed in such a way that the sections can be read independently, it will help readers get a little bit closer to movies. Readers will feel like they are listening to engaging lectures without having to be in a classroom.

"'Cine Class' - atypical guide to film"
by HanCinema is licensed under a Creative Commons Attribution-Share Alike 3.0 Unported License.
Based on a work from this source