'Coming Out Changed My Life' 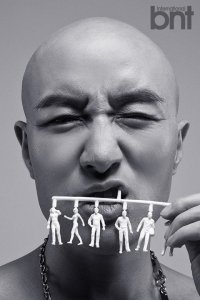 Actor Hong Suk-chun is a strong man. He is strong not only because he "came out of the closet" eight years ago when there was nobody to support him, let alone understand, but because he has lived his life to the fullest ever since.

"There were times when it was so hard that I just wanted to give up everything. Living as the only one (to come out) in this business is hard. Harder than you can ever imagine", he told The Korea Times during an interview at his restaurant "Our Place".

Hong, 37, recently finished hosting a cable television program "Coming Out". Hong worked as a mentor, giving advice and supporting young homosexuals. Despite worries, "Coming Out" proved to be a success, opening a small, yet promising door. Six participants appeared in the show and openly declared they were gay and were happy about it.

"When we first prepared the program, the producers wanted the show to be touching and mostly sad. But I wanted it to be happy and fun. The perspective that homosexuals lead a hard life is true, but that's not everything. I told (the participants) to be confident and proud. They are young, talented and fun, and I wanted our society to see that through the program", he said.

How does it feel to have finished a show that was so different and somewhat shocking?

"I feel relieved and proud. I fought so hard by myself ever since I came out eight years ago. Nobody came up to me and said I made the right decision, but now I have friends who understand me", he said.

Hong obviously learned a lot through his journey and he was willing to pass on that wisdom.

Hong knows a lot about being determined, for he has been busy with other businesses beyond acting. He currently runs three restaurants, "Our Place", "My Tai" and "My China", and a bar "My Soul Bar", as well as an online shopping mall and has even appeared in several musicals. He is also preparing to publish a new book, his own clothing line and even produce performances.

"I put `my' in most of my businesses because I wanted to guarantee the quality to the customer. My work is based on my perspective, style and preferences. I hold great responsibility in everything I own so people can trust the quality. I guess it's like a guarantee seal", he said.

He may have a lot of things planned ahead, but his main goal was just one thing: appreciate life and work.

"I'm a workaholic. Coming out has changed my life and it has also made me think differently. It has been the drive for me to work hard, and I think now it is pointing to a new direction. Wherever I go, whatever I do, the experience will never leave me and this will continuously help me live my life to the fullest", he smiled.

"'Coming Out Changed My Life'"
by HanCinema is licensed under a Creative Commons Attribution-Share Alike 3.0 Unported License.
Based on a work from this source