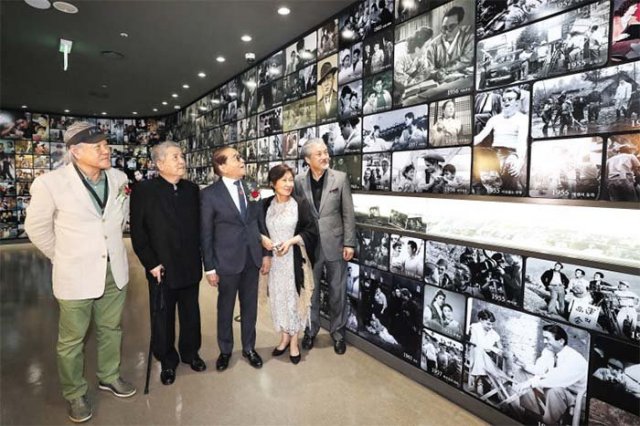 Veteran directors and film stars look at exhibits at the opening of a cinema museum in Jongno, Seoul on Wednesday. From left, directors Lee Jang-ho and Im Kwon-taek and actors Shin Young-kyun, Kim Hye-ja and Han Ji-il.

Korea's first movie theater, Dansungsa, has been turned into a cinema museum to commemorate the centennial of the birth of Korean cinema.

An opening ceremony was held on Wednesday at the historic building in Jongno, Seoul with some prominent figures in Korean cinema attending.

Dansungsa is known as the cradle of Korean cinema. It initially opened as a performing arts theater in 1907 and was converted into a movie theater in 1918. It staged Korea's first kino-drama, "Justice for Fight", in 1919 and first silent film, "Arirang", in 1929, becoming the center of the industry.

Its heyday came to an end in the 1990s, however, as more and more moviegoers began to shun older theaters in favor of multiplexes. The changes brought financial problems, and Dansungsa eventually went bankrupt in 2008. A real estate company bought the building in 2015 and remodeled it.

One of the old cinema's screening rooms has been preserved, while the building's 1,421-sq.m second basement level has been completely refurbished to house the museum. Some 5,500 of the museum's collection of 82,400 items, including movie posters, fliers, transcripts, photos taken on set and filmmaking equipment, have been selected and put on display to illustrate the history of Korean cinema.