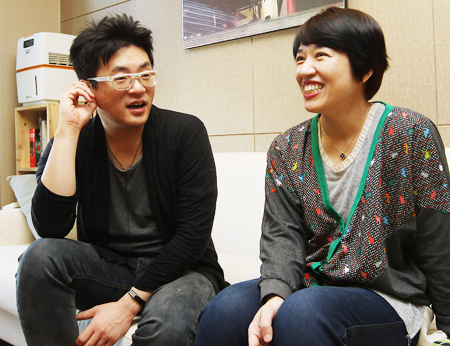 Park Sang-yeon, left, and Kim Yong-hyeon are the writers of "Deep-rooted Tree", an epic drama revolving around the creation of "Hangeul" by King Sejong. / Yonhap

A peaceful era is the ultimate goal of governance but that could require some hellish work on the part of the ruler, especially when the work also involves creating "Hangeul" or Korean alphabet.

"Deep-rooted Tree", a 24-episode drama that recently concluded on SBS, grippingly depicted the struggles of King Sejong (1397-1450) in the Joseon Kingdom (1392-1910). Based on a two-part historical novel of the same name, the drama drew ratings of over 20 percent.

"We thought long and hard about what Hangeul symbolizes, and we decided that it represents power", said Kim Yong-hyeon and Park Sang-yeon, the writers who co-authored the drama about the birth of Hangeul. The duo was also behind another popular drama, "Queen Seon-deok", which aired on MBC in 2009.

The program focused on three clashing parties; the king played by Han Suk-kyu who wants to invent characters for his people, "Milbon", a group of high-ranking officers who try to stop the project to retain power over the lower classes and a few commoners including So-i and Gang Chae-yun, played by Shin Se-kyung and Jang Hyuk respectively, who become involved by chance.

It starts off with a series of murders that show the need for an alphabet for commoners to the king. So he pursues the task in secrecy. When members of Milbon find out about the plan, they take extreme measures to stop it including killing scholars of Jiphyeonjeon, a research institute founded by the king, involved in the Hangeul project.

The writers wanted to focus on the king's motivation. "We thought in order for someone to work this hard for something, he had to have been under immense pressure and required a dramatic incident to motivate him", said Kim.

The show boasted scenes that caught viewers' attention. One showed the king performing an autopsy to learn about the structure of human vocal cords. Many viewers also picked the scene when the king revealed that Hangeul only has 28 characters, shocking others who expected the new system to include countless letters like Chinese.

"That scene was memorable to me as well. This drama allowed us to revisit the incredible scientific research that went into the creation of Hangeul, things that we take for granted". said Park.

Kim added, "I think King Sejong was a genius, and he did so much studying to establish a solid system. He had this conviction that the new writing system had to be phonetic".

The writers denied rumors of political references the drama prompted. Park explained: "We did not intend it at all. When we were creating the characters we wanted to picture a dramatic leader. I guess there were two former leaders who had a dramatic life; Park Chung-hee and Roh Moo-hyun. And if one had to pick, King Sejong is more similar to Roh than Park.

Both writers were extremely satisfied with the actors' performance.

"When Han delivered his lines, I felt so lucky that I was writing for a true actor like him", Park said.

On Shin, he said "Not many actors her age can deliver such dark and heavy emotions".

The popularity of the show is not limited to Korea. Park received the same messages from friends in New York, Philadelphia, and Los Angeles that said "They are going crazy over your drama at my church here".

When asked what they would say if they could meet the king in person, Kim said "I have only one thing to say; I want to thank him".