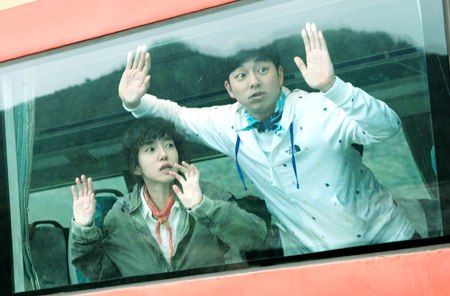 Lim Soo-jung, left, and Gong Yoo appear in a scene from the romantic comedy "Finding Mr. Destiny", which opens in theaters on Dec. 9. / Courtesy of CJ Entertainment

First loves last forever, and a new romantic comedy delightfully captures that tingly, fuzzy, and oftentimes heartrending, experience and how it tends to map out the blue print for people's romantic patterns.

"Finding Mr. Destiny" offers the audience precisely what is expected of the genre — charming oddball characters, plenty of good laughs and a touch of poignant drama.

The premise is quite simple. Ji-wu (Lim Soo-jung), unable to forget a youthful affair in India that has tattooed itself onto her heart, rejects an eligible suitor and is forced by her father, who fears she will end up an old maid, to seek the help of an agency that specializes in tracking down first loves. Heading the business is Gi-jun (Gong Yoo), who is of course young, single and male, and equipped with goofy charm. The two are polar opposites yet eventually grow fond of each other as they bicker along the way to find Ji-wu's elusive Mr. Destiny — and it's a long journey since there are 1,108 men who have the same name as her ex-boyfriend, from a Buddhist monk to an overweight farmer and a really unctuous plastic surgeon, to name a few.

The fall box office has already seen a story about hired cupid services, "Cyrano Agency", which was the first memorable local romantic comedy since the 2001 "My Sassy Girl". "Finding Mr. Destiny", however, manages to stand apart by bringing in the dramatic tension of the detective genre.

The movie is actually based on a hit musical of the same name ("Finding Kim Jong-uk" in Korean), and newcomer director Chang You-jeong makes a great screen adaptation marked by fine visuals that reflect a minute attention to props and details, with flashy scenes from a musical (paying homage to the script's origins) and the picturesque exoticism of India where the heroine's unforgettable romance unfolds.

Jang brings a fresh rhythm and zest to what is actually a rather complex story about coming of age, and musings about first loves and second chances. The idea of being haunted by a brief affair that occurred 10 years ago may seem implausible for some. But the consistency of the film's internal logic, with its fairytale-like appeal and whodunit format, keeps the viewers engaged and wondering about what really happened in India and what will become of the blooming attraction between the uncanny detective and his client.

The film takes the time to introduce characters and their convincing personas, complete with very human flaws and histories — the heroine is a disheveled and foulmouthed theater director who has yet to make amends with her inability to finish or start anything substantial in both her love life and career. The hero is a naive guy with an obsessive compulsive fixation on order, safety and hygiene — manifested in his perfectly pressed attire and color coded post-its — who has yet to leap into a whirlwind life experience. The rich character development makes the "Along Came Polly" dynamics between the two into something more than light slapstick.

"Finding Mr. Destiny" is also packed with memorable sideline stories and supporting characters, including a militant soldier father who is actually all mushy inside and a feverishly devoted fan of "saju" (Korean equivalent of horoscopes), and even cameos by household names. The film drags a little in the middle section, but the slight glitches are easy to ignore.

"'Destiny' sweetly reminisces first loves"
by HanCinema is licensed under a Creative Commons Attribution-Share Alike 3.0 Unported License.
Based on a work from this source