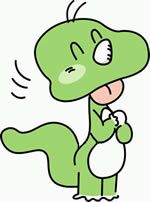 Korea's most popular and favorite cartoon character is "Dooly", according to the results of a survey by the Korea Culture and Content Agency announced on Wednesday.

When asked about the first thing that comes to mind when thinking about cartoon characters, some 30.9 percent of the respondents cited Dooly. Mickey and Minnie Mouse came second with 19.7 percent, followed by Kitty with 16.7 percent, the Japanese character Jjanggu with 15 percent and the Korean character Mashimaro with 12.7 percent.