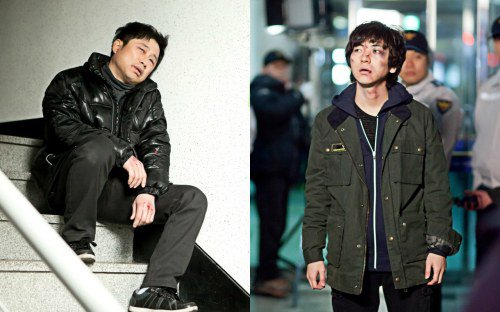 Lee Moon-shik and Lee Joo-seung from the KBS "Drama Special - Stay Still" are covered in blood.

Lee Moon-shik's character is a detective named Park Chan-soo and Yang Joon-sik is a teenage offender who tries to live a new life under him.

The picture seems to explain a situation where Lee Moon-shik got into a fight with someone and is slumped by a set of stairs. In another still, Lee Joo-seung looks terrible with bruises and blood everywhere. However, he looks expressionless as if his emotions have gone numb.

What happened between the two of them? Where will their small hopes to live by their dreams end?

Aside from that, apparently Lee Moon-shik and Lee Joo-seung couldn't help but laugh at each other every time they made eye contact during the shoot.

According to a source, "Lee Moon-shik and Lee Joo-seung have such high levels of concentration. Despite the amount of work that has to be done in a short amount of time, the veteran and rookie actors create great chemistry together".

"Drama Special - Stay Still" is about the disappearance of Park Chan-soo's daughter and the serial events that happen to the people around him.

Meanwhile, a teaser was released on the 6th, of Lee Joo-seung tied up in a blaze of fire and Lee Moon-shik crying his heart out.

"'Drama Special - Stay Still' Lee Moon-shik and Lee Joo-seung covered in blood"
by HanCinema is licensed under a Creative Commons Attribution-Share Alike 3.0 Unported License.
Based on a work from this source