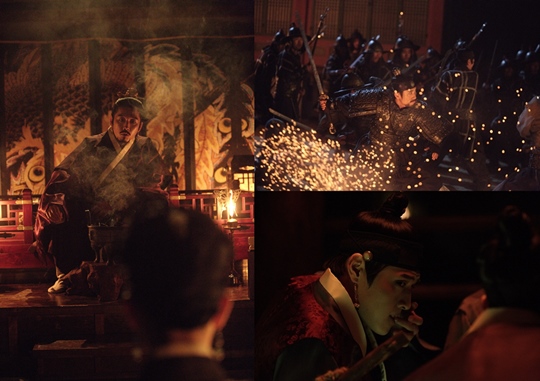 The still images of characters from 'Empire of Lust' unveiled.

On January 21st, the film 'Empire of Lust' released the character stills featuring the three men, Shin Ha-kyun, Jang Hyuk, and Kang Ha-neul, who lived their lives in the difficult time in Joseon.

Director Ahn Sang-hoon, who captivated the critics with his previous work, "Blind" by introducing the new prototype to Korean thriller movies with the robust structure of story and new types of characters, now has turned his eyes towards the formidable fate of the three men during the early era of Joseon where lust for power and throne dominated.

The film, 'Empire of Lust' is about a bloody history recorded as "The War of Princes" fought for the ownership of the throne in the middle of the era of the burning ambition, which history tried to hide. It is also a story about the most innocent desire that sprouted in the tragic fate during the early era of Joseon where the endless conspiracy prevailed around the successor of the throne.

The film has been drawing attention for the powerful transformation of the three actors, Shin Ha-kyun, Jang Hyuk and Kang Ha-neul.

The historical background of the movie is the year of 1398, seven years after when Taejo, Lee Seong-gye established the new country. According to the Annals of the Joseon Dynasty, it is the year when Prince Lee Bang-won purged his rival faction and grabbed the power.

'Empire of Lust' dealt with another bloody tale at the back of "The War of Princes", which employed the cinematic imagination in addition.

General Kim Min-jae is the character Shin Ha-kyun played in the movie, who reached the position as the supreme commander for his meritorious achievement to have protected the nation from the invasion by Yeojin and Japan. Although he is devoted to protecting the king and serving the people in the country, he lives his life unaware of his own personal desire.

He gets to find himself feeling love for the first time of his life one day and takes all of the risks to pursue "Innocence". The excellent acting performance by actor, Shin Ha-kyun brings the character to life, as he perfectly portrays the two contrary images of the most outstanding commander in Joseon versus to the man as a lover who pursue innocence

"'Empire of Lust' New film starring Shin Ha-kyun, Jang Hyuk and Kang Ha-neul to be released in March"
by HanCinema is licensed under a Creative Commons Attribution-Share Alike 3.0 Unported License.
Based on a work from this source