'Ennio Morricone of Korea' spotlighted with his best album 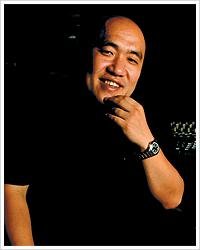 Can you imagine the film "Cinema Paradiso" without Ennio Morricone's score masterfully capturing the gentle-natured, nostalgic feel of the film? Music's influence on moviegoers' attitude toward a film is far greater than one might think, yet few attribute a film's success to it in Korea.

This could be why there are few composers dedicated fully to original film scores in the country, but at least the film industry has one outstanding film music composer worthy of being proud of: Jo Seong-woo, president of M&F (Music & Film) Creation.

"A talented composer can't necessarily be a good film composer because it takes a deep insight into filmmaking", Jo said in an interview with The Korea Herald.

This Thursday, a CD collection of his film scores containing a total of 32 pieces of music highlighting 23 different films will come out. The album titled "Jo Seong-woo: Best of Cinema Music" is, according to Jo, the very essence of his music persona as well as a memoir of the time when both the film and its music were being worked on.

"Personally, I prefer avant garde and experimental films because they leave more room for a unique style of a film music director", continued Jo, who started his musical journey by playing the piano and violin when he was very young but also did rock music while studying philosophy at Yonsei University. "But I cannot be totally ignorant of the film's commercial potential, as the success of a film's soundtrack is closely related to that of the film".

"We had David Agnew - renowned oboist who played the oboe in 'Gabriel's Oboe' from the film 'Mission' (1986) - and the Czech Boys Choir Boni Pueri for the original scores, but the film turned out to be a box-office dud", he said. "Another example was 'Take Care of My Cat' (2001)".

Whether or not the films he participates in are successful or not, he always makes sure that his music ensnares viewers by enhancing the emotions that the work aims to instill. "I don't think I have ever used my music in a way that deteriorates film scenes", Jo said in a firm voice.

He often begins writing music after only reading a script, and later he edits it to complete scenes of a film. "It is far easier to work when there is much to be shared emotionally between me and the film director", he said. This is why he and film director Heo Jin-ho, his close friend, have worked together for many films, including "One Fine Spring Day" and "April Snow", which he finds are on the list of his favorite film-music combinations.

"To me, Vangelis' music used for 'Chariots of Fire' (1981) and 'Blade Runner' (1982) seems to show what film music is all about", said Jo who teaches a philosophy class at his Yonsei's campus in Wonju, Gangwon Province. "Film music is supposed to go hand in hand with films, which is why it is important for Korean film composers to have enthusiasm for the distinctive style of uniquely Korean music for unique Korean films".

The "Ennio Morricone of Korea" has played film music concerts under his name in Japan with a symphony orchestra. This year, he will present a concert tour in major Japanese cities in October with the KBS Symphony Orchestra.

"'Ennio Morricone of Korea' spotlighted with his best album"
by HanCinema is licensed under a Creative Commons Attribution-Share Alike 3.0 Unported License.
Based on a work from this source