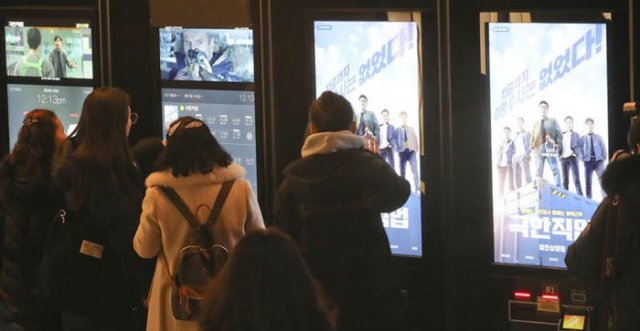 People buy tickets at a movie theater in Seoul on Wednesday. /Yonhap

Director Lee Byeong-heon-I's comedy "Extreme Job" has attracted over 10 million viewers in the two weeks since it was released on Jan. 23, the 23rd Korean film to achieve the feat.

It was also the third-fastest to reach the milestone. "The Admiral: Roaring Currents" took 12 days, and "Along With the Gods: The Last 49 Days" needed 14 days.

"Extreme Job" seems to appeal to audiences of all ages with its light-hearted humor. It started out drawing mostly younger crowds, but word-of-mouth has helped it to attract more older viewers, especially during the Lunar New Year break.

It is only second comedy to lure 10 million viewers since "Miracle in Cell No.7" in 2013. This is all the more telling after a number of serious political blockbusters failed to produce box-office sensations last year.

The key to its success, paradoxically, is what it does not do, lacking as it does three stock ingredients of Korean films.

Kang  Yoo-jung, a film critic, commented, "The "Extreme Job" does not have a political agenda, historic plot, and tear-jerking melodrama. The movie is quintessentially middle-of the-road, so it is easy to watch for anyone".

"The age groups of moviegoers is expanding, and "Extreme Job" was something that could be enjoyed by the whole family", said Hwang  Jae-hyun, head of PR at multiplex chain CGV. "Extreme Job" has no grueling bloody action scenes nor graphic sex scenes. It simply has a great plot that was brought to life by great acting.