'Family' Plays by Its Own Wonderful Rules 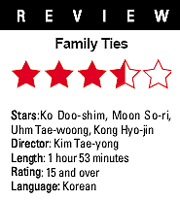 Every once in a while, there comes a movie that spins in a separate orbit from all others. Coming out of left field, it seems to play by a completely different set of rules than most feature films, leaving the audience to either love it for its sense of originality or dismiss it as being random and incomprehensible.

That's the risk that the new film "Family Ties" ("The Birth of a Family") takes, courting pretension and contrivance throughout its 113-minute journey. But in the final tally, the film wins its gamble, and those who are patient enough to see the story to its end will be rewarded with a fresh perspective on love, family and social conventions.

Director Kim Tae-yong made his feature debut in 2001 by co-directing "Memento Mori", the inventive second installment of a high-school horror film series. Just as "Memento Mori" reconfigured the teenage horror genre, "Family Ties" ("The Birth of a Family") sets to reinterpret the conventions of the drama.

The film works as a compilation of three short films that tell distinct and seemingly disconnected stories. Each works well by itself, and are so good that you'll wish they didn't have to end so quickly.

This is especially true for the first narrative, about a young street-food vendor who suddenly gets a visit from her missing brother. The 28-year-old man, played by Uhm Tae-woong, hasn't been home in five years, and now turns up with his lover, a woman 20 years his senior.

The unusual story is also a treat as it stars Moon So-ri and Go Doo-shim, two of the top actresses in the business. The two veterans are a pleasure to watch, as Moon transforms herself into the mousy vendor and Ko, playing the older lover, gets to show the public that she can play something other than a maternal figure.

It's a shame that we only get to watch the pairing of Moon and Ko for a short duration, but the remaining parts of "Family Ties" ("The Birth of a Family") make up for it. The film consistently offers a wide range of complex female characters played by talented actresses, a refreshing change from the usual domestic melodramas. Gong Hyo-jin particularly shines in the middle story as a young tour guide whose personality is divided between her rage against her family and her job's demand for constant politeness.

Along with a penchant for odd characters, the stories share a common theme of dysfunctional families and relationships that later connect with one another in unexpected ways. In describing the relationships, director Kim wisely avoids angst and melodrama, and instead injects the stories with doses of humor that at points border on the absurd. This off-kilter quality gives "Family Ties" the right amount of tension; it keeps the audience smiling while they're trying to guess where this wonderful mess is heading.

"'Family' Plays by Its Own Wonderful Rules"
by HanCinema is licensed under a Creative Commons Attribution-Share Alike 3.0 Unported License.
Based on a work from this source