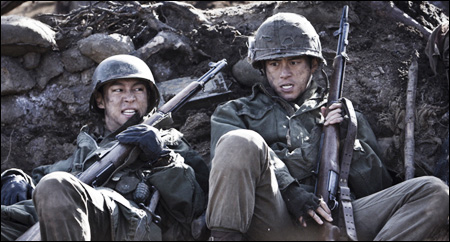 It's another Korean War (1950-53) film, made on a hefty budget - at least for local standards - and featuring an A-list cast.

The viewer, already having seen such action-packed, homespun tearjerkers celebrating humanist values as "Taegukgi" and "71-Into the Fire" or any one of those Hollywood World War II blockbusters, can easily doubt whether Jang Hoon's upcoming "The Front Line" could bring something new.

The film, albeit slightly flawed, chooses a road not yet taken in the genre here - straight into the tropes of Conradian heart of darkness, offering harrowing observations about the tragedy of war and, moreover, the savage rules of survival.

Scriptwriter Park Sang-yeon, who showed the painful reality of a divided country in Park Chan-wook's 2000 inter-Korean thriller "JSA - Joint Security Area", depicts the contradictions of war in a more direct and realistic way in "The Front Line" by zooming into life and death at the front line. Jang, who has directed well-received films such as "Rough Cut" and "Secret Reunion", enlivens Park's story by turning it into a surprisingly satisfying war film, complete with spectacular battle scenes, dramatic tension and reverberating universal messages.

It's July 1953. The war is coming to an end, and North and South Korean officials and their allies are negotiating the geographic coordination of the demarcation line that is to split the peninsula in half. During the last two years of the chess game talks alone, some 3 million men lost their lives to determine whether the line would move up or down 1 centimeter, or 15 kilometers, on the map.

The film is essentially a mystery drama. One day, a South Korean squad leader is killed at the front by a bullet that seems to have been shot by one of his own men, while a North Korean soldier's letter is delivered to his family in the South via Southern military mail service. Eun-pyo, a lieutenant played by Shin Ha-kyun, is dispatched to watch out for suspicious spy activity within the squad.

He arrives at Aerok Hill, which is a highly contested area in this land siege, and is surprised to reunite with his college friend Su-hyeok (Go Soo), who had been kidnapped by Northern soldiers years before and long thought to have been dead.

Viewers accompany Eun-pyo on his first exposure to the front line, encountering one oddity after another. Su-hyeok, a cowardly geek, has transformed into a charismatic warrior. Soldiers shamelessly wear enemy uniforms to counter the cold while war orphans have made the military camp their home. Il-yeong (Lee Je-hoon), a morphine-addicted boy barely past his pre-teens, is captain of the squad, which includes a schizophrenic and a man speaking with a Northern dialect.

The film proceeds by unraveling one secret after another, and things take a turn by revealing how collusion had indeed been taking place. The moment the identity of the sender of that "spy mail" becomes known, references to "JSA - Joint Security Area" are inevitable. But what makes it interesting is that this incident takes place some half-century back, in the middle of the battlefield.

The movie shows how these men at the front, whether Northern or Southern, have seized to fight for "a greater cause". They only struggle to survive, desperately hoping for the armistice to be announced. Their common enemy is the overbearing reality of war, and the men from both sides become united by their angst.

What makes "The Front Line" work is that it is an ideology-free antiwar film; it simply shows the brutality of "killing without a purpose". The only regret is that the film tends to take this theme to extreme ends, and have actors mutter at times contrived pacifist messages.

Nevertheless seasoned actors such as Shin and Ryu Seung-ryong, who plays a listless North Korean official, bring weight and girth to the story, while funnyman Ko Chang-seok peppers the film with humor. Lee, who entered the spotlight with "Bleak Night", brings yet another memorable character while post-"White Night" Ko once again proves his capacity for more serious roles.

In theaters July 20. Rated 15 and over. Distributed by Showbox/Mediaplex.

"'Front' brings harrowing views of war"
by HanCinema is licensed under a Creative Commons Attribution-Share Alike 3.0 Unported License.
Based on a work from this source