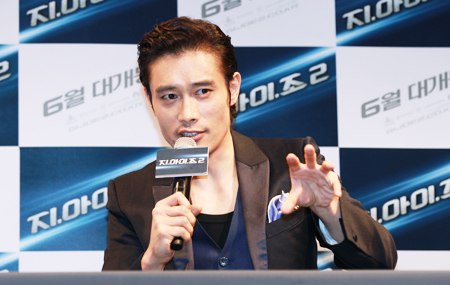 Lee Byung-hun, who stars as Storm Shadow in the new film by Jon M. Chu "G.I. Joe: Retaliation", speaks at a press conference Wednesday. The movie opens in theaters nationwide in June. / Courtesy of 1st Look

At a press event to plug the second installment of the G.I. Joe franchise in Seoul Wednesday, Lee shied away from accolades and was focused on praising the film instead.

"I absolutely think that (the sequel) will be more fun than the first one", he said firmly at the conclusion of the Q&A session. 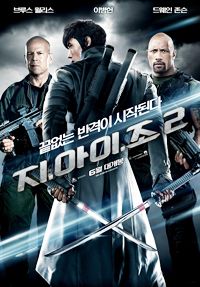 "G.I. Joe: Retaliation" is directed by Jon M. Chu and stars Bruce Willis and Dwayne "The Rock" Johnson. It is slated to open in theaters nationwide in June.

Lee based his claim mostly on the excellence of the 32-year-old American director, who replaced the original's Stephen Sommers (best known for "The Mummy" series).

According to Lee, Chu gave a breath of fresh air to the action film.

"If Mr. Summers concentrated on showing many different characters and state-of-the-art CGI-enhanced scenes together, Mr. Chu was focused on the people. He wanted to show their personal histories", he said. "He thought of the drama on top of flashy visual effects".

Earlier, the actor said he was also more satisfied with his own acting, though language difficulties remained an issue on set.

"If I had just a lot of sword fights and kicks in the first movie, this time my character (Storm Shadow) is seen more up close. It has a dramatic aspect that shows his history, inner conflicts. I loved how much of my acting I could show this time around... but I still think I could have been much more competent in a Korean film.

"Frankly speaking, it's hard. Casual speech and delivering lines in English belong to two different dimensions. Because you use a foreign language, you've got to be sure you could recite lines without a mistake even if someone woke you up from a nap.

"On the set, someone from the crew told me after Iread my line that my pronunciation was off for one of the words. Right after my head became completely blank, busy thinking about that one line. Sometimes I felt I was back in the earliest days of my career".

His character is an independent combatant who fights for neither good nor evil in the story. Lee said that his status as a loner was the role's biggest attraction and claimed he would not want to play anyone else, even if he were given a chance.

After his debut in 1991, landing a part in a TV drama series following an open audition, Lee fast became a heartthrob and the center of media attention. But the actor has since established himself as a rare figure on the Korean screen who has achieved both critical acclaim and commercial success, unencumbered by his good looks.

At cinemas or on TV, his name headlined a marquee of monster hits, from "JSA - Joint Security Area" (2000) by Park Chan-wook, the highest grossing film here at that time, to "IRIS" (2009) on KBS, the most expensive Korean small-screen drama in history.

Riding high on national-level success, Lee became one of the first Korean actors to break out in the overseas markets, starting with the 2008 arthouse film "I Come with the Rain" by French director Tran Anh Hung. He starred alongside American and Japanese leading men Josh Hartness and Takuya Kimura, respectively.

It was also announced Wednesday morning that on June 23, Lee and Korean acting great Ahn Sung-ki will be guests of honor at the Korean Film Festival in Los Angeles, becoming the first actors of Asian origin to leave their hand and footprints at the plaza in front of the iconic Grauman's Chinese Theatre.

Almost 200 Hollywood celebrities have left their mark there since 1927, the year of the venue's opening.

At the press event, however, Lee played down the hype and took it with utmost modesty.

"There are people who set goals and there are others who have dreams. Goals are something you think are realizable in the future, but dreams are based on just your wishful thinking. This honor is even beyond my wildest dreams".

The film "G.I. Joe: Retaliation" will have its world premiere in Hong Kong, on June 21.

"'G.I. Joe: Retaliation' bests original"
by HanCinema is licensed under a Creative Commons Attribution-Share Alike 3.0 Unported License.
Based on a work from this source