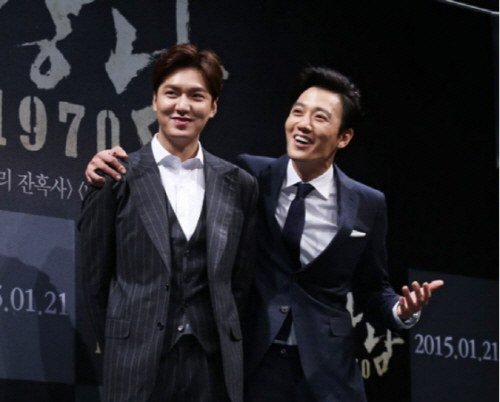 Actors Kim Rae-won and Lee Min-ho attended the press event of the movie production, which took place at CGV Apgujeong in Gangnam, Seoul on the 12th and shared their stories behind the scenes.

Director Yoo Ha said, "I told Kim Rae-won it will be great if he could lose about 15Kg. And he came back to me exactly a month later with 15kg lost. Kim Rae-won responded saying, "He asked me to lose some weight because my role in the beginning of the movie is a ragman. I also thought it will be helpful when I act expressing emotions through eyes. So I exercised hard. I don't have any special tricks for losing 15kg in a month. I just exercised and controlled my diet".

And then Lee Min-ho commented, "Kim Rae-won had one sex scene. I had also one in the movie but it is not as intense as his. His scene is intense. I am guy but I thought in the scene he looked sexy and was like a beast".

Lee Min-ho also talked about himself, who took on the main role of the movie, "I wanted to be on screen when I am into my late 20s so I am mature enough to be responsible for a movie. I could concentrate on acting probably because I have been preparing myself for the right timing".

Movie ' Gangnam Blues' is the final sequel of the trilogy including ' Once Upon A Time In Highschool' and 'A Dirty Carnival' directed by Yoo Ha. It is an action movie that depicts desire, betrayal and friendship between two men in 1970's Seoul. The movie will be released on January 21st, 2015.

"'Gangnam Blues' Lee Min-ho's comment about Kim Rae-won's sex scene"
by HanCinema is licensed under a Creative Commons Attribution-Share Alike 3.0 Unported License.
Based on a work from this source