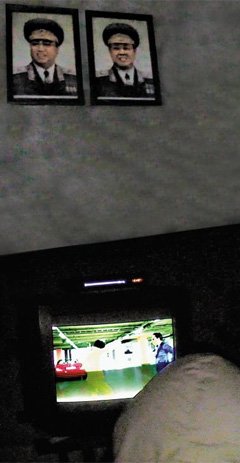 A North Korean watches a video of "Gangnam Style" in this screen grab from clandestine footage obtained by Caleb Mission. /Courtesy of Caleb Mission

Not even North Korea has been spared the global phenomenon that is "Gangnam Style". The Chosun Ilbo has footage of North Koreans watching a video of rapper Psy's smash hit.

Caleb Mission, which supports North Korean defectors, acquired the video while trying to find out how South Korean entertainment plays in the North. The mission, along with the Chosun Ilbo, gathered information in a Chinese border city last month.

In the clips, two North Koreans are sitting in a dark room hiding under a blanket wearing hooded coats and watch the music video on a DVD player.

"Gangnam Style" has amassed over 1.2 billion hits on YouTube. It seems to have reached North Korea on samizdat DVDs since ordinary people have no Internet access there.

The top part of the "Gangnam Style" video in the clip shows Chinese characters naming the company that distributed it. When the music starts, the two North Koreans start to move their shoulders. A shot of the interior shows portraits of North Korea's nation founder Kim Il-sung and his son Kim Jong-il hanging on the wall.

Those portraits were replaced in most homes two months ago.