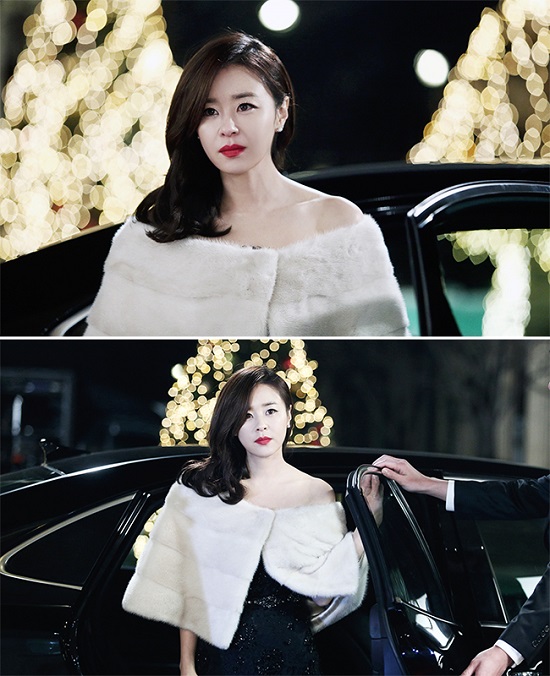 In the revealed images, Choi Kang-hee shows off her femme fatale appeals, which are completely opposite to her previous humble image. Choi Kang-hee in the off shoulder black dress looks mesmerizing with the intense makeup and her enthralling eyes. Her new look oozing the heartless cold vibe is drawing attention.

The photos revealed are parts of the ending scene of the 20th episode, which was aired on December 8th. The scene depicts the entrance of Eun-soo (Choi Kang-hee) to the party hosted by Kang Il-joo (Cha Ye-ryun) family after Eun-soo had decided to take revenge against Kang Il-joo.

When she locked her arm around Kang Seokhyeon (Jung Jin-young)'s, it surprised everybody at the venue and also hurt Jin Hyeong-woo (Joo Sang-wook)'s heart badly.

While Eun-soo previously persuaded Hyeong-woo to stop taking revenge, her glamorous transformation as she decided to take revenge for her daughter drew heated reaction from drama fans.

"'Glamorous Temptation' Choi Kang-hee reveals her femme fatale side in behind-the-scenes images"
by HanCinema is licensed under a Creative Commons Attribution-Share Alike 3.0 Unported License.
Based on a work from this source