'Glove' pitches for love of the game 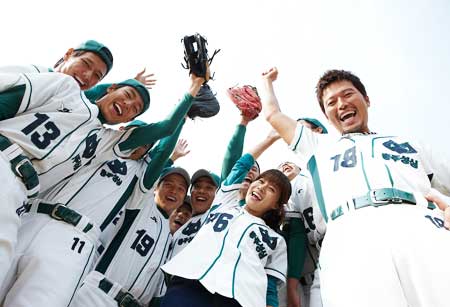 A scene from Kang Woo-seok's sports drama "GLove", which is based on a true story about hearing impaired boys challenging themselves through baseball

You can hear it loud and clear - hope is at bat here.

The New Year cinema lineup opens in full swing with a heartwarming baseball story - a classic, feel-good sports drama which, albeit formulaic at times, inspires viewers to fervently cheer for the underdogs.

Moreover, the film's incontestable sweet spot lies in faithfully delivering a true story, almost to the point of being brutally so in depicting the realities of the physically disabled. A local television documentary previously introduced a group of Sungsim hearing-impaired high school boys trying to play ball, dreaming of winning just once at the nationals.

Kang may be a rookie to the sports drama category, but this cinema giant's pure love for the game triumphs (the director, who virtually lived in baseball stadiums as a boy, explains that "baseball is love - the word 'GLove' without the G spells out the word") as he tastefully weaves in fictional elements to the real tale.

Jung Jae-young ditches his old man's wig from "Moss" to play the overpaid pitcher Sang-nam, who is now making more headlines for notorious bouts of violence rather than winning games. News breaks of another one of his drunken fiascos - this time complete with swinging a bat off the field - and his manager drags him out to coach kids at a school for the hearing impaired in Chungcheong Province.

It's "Mighty Duck" all over again, and it's pretty obvious what's going to happen: Sang-nam is initially not just reluctant but downright pessimistic about the boys' plans to enter the nationals - these athletes often have trouble locating the ball on the field nor communicate with one another. But the publicity stunt eventually becomes an opportunity of a lifetime through which Sang-nam not only bonds with the students but also becomes inspired himself to face his personal issues.

Yet rest assured that the tears you are programmed to shed at certain moments (the ones featuring sweeping violin music in the background) won't be in vain. Whether or not you want to admit it, it really feels touching rather than manipulative cinematic effect. Last year's critically acclaimed football film "Barefoot Dream" finds an apt successor that will continue paving the way for the nascent sports drama category here.

Kang opts to embellish the story of the tortured fading star with some comical yet endearing dynamics with a desperate manager and a potential love interest. Cho Jin-woong ("Barefoot Dream") plays the role of Cheol-su, or "Charles" in his broken English, a childhood friend-turned-manager, who cannot give up hope of turning Sang-nam into the next Park Chan-ho, while Yoo Sun ("Moss") is a spunky Mother Theresa-type who mothers the baseball team and initially despises the washed up athlete.

Yet the MVPs of this particular game are of course the younger actors engaged in sign language and bat-swinging. In addition to casting familiar faces like Kim Hye-sung ("71-Into the Fire") and Lee Hyun-woo, Kang chose newcomer Jang Gi-beom to propel a good half of the narrative. Gi-beom, once a promising pitcher, suddenly loses his hearing and swears never to play baseball again.

He resorts to cutting classes, unable to cope with his new life, though he still channels his angst into solo pitching sessions on the school field at night.

When the baseball team's only pitcher quits, Sang-nam, who sees his younger self in Gi-beom, persuades the chap to enter the team. But the team faces even bigger challenges - the boys must first learn to believe in their own potential before proving themselves to the world.

In theaters Jan. 20. Distributed by CJ Entertainment. Three out of four stars.

"'Glove' pitches for love of the game "
by HanCinema is licensed under a Creative Commons Attribution-Share Alike 3.0 Unported License.
Based on a work from this source