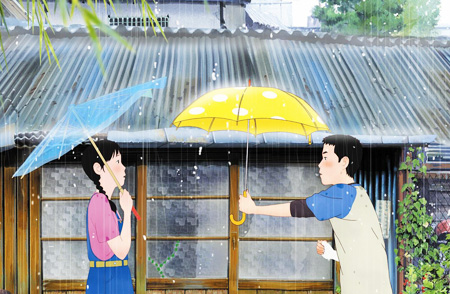 Directors Ahn Jae-huun and Han Hye-jin-I bring a hand-drawn 2D animation, "Green Days: Dinosaur and I". The film opens in theaters on June 23 after touring film festivals. / Courtesy of A1 Entertainment

Pushing on for 11 years with the painstakingly old school method of using hand-rendered drawings - 100,000-plus sheets by just 14 artists - is striking to say the least, especially in this age where everything is 3D.

Yet "Green Days: Dinosaur and I" stands out because the retro style delightfully reflects substance. The 2D animation turns the classic coming-of-age story into a lyrical fantasy that is rife with nostalgia and speaks directly to the heart.

Korean cinema has established a solid reputation on the international scene, but local animations are almost unheard of and even the most successful franchises rarely make it past the small screen.

This year sees the unprecedented release of homegrown feature cartoons, and "Green" spearheads the movement as the most promising venture. It debuted at last year's Busan (formerly Pusan) International Film Festival (BIFF) to favorable reviews and is currently competing at Annecy in France. It will vie for the top prize at next month's Seoul International Cartoon and Animation Festival (SICAF).

Directors Ahn Jae-huun and Han Hye-jin-I, who helmed "hallyu-fed" animated spinoffs of TV soaps such as "Winter Sonata", take viewers back to a small rural town in the late 1970s, when boys and girls were strictly segregated in schools, Wonder Woman reigned on television and "Love Story" tugged at the heartstrings.

The beautiful watercolor-rendered drawings bring added vibrancy to period details that have appeared in popular films such as "The Classic". Even today's over-stimulated audiences will become engrossed in a unique audiovisual experience, as train tracks and mom-and-pop stores embellish the pastoral scenery and old pop songs punctuate the soundtrack.

At the center of the story is Yi-rang, convincingly voiced by spunky actress Park Shin-hye. She is the fastest runner in her school, but is so terrified of failure that she chooses to quit when another girl overtakes her.

She chooses to suppress the hard memories and looks elsewhere for new inspirations and distractions. She develops an instant admiration for Soo-min, a sophisticated and rather precocious transfer student from the big city, and is impressed by the girl's confidence when it comes to dating preferences and composing morbid poetry a la Sylvia Plath.

But it's in her friendship and budding romance with Cheol-soo (actor Song Chang-eui sounds surprisingly youthful) that she finds the courage to confront her fears. As Cheol-soo shares his hopes of becoming a scientist-cum-astronaut one day, Yi-rang begins to realize that she needs to figure out what she really wants in life.

The film provides a tender, yet far from sentimental, depiction of innocent first loves and adolescent struggles marked by anxiety and awkward mistakes.

The dinosaur in the title refers to how failure as youthful motivation can be more than a thing of the past, a mere fossil - and there are lessons to be learned not only by children but also by disoriented urbanites and disillusioned adults.

The overdrawn subject of the importance of hope and dreams amounts to more than just quasi-philosophical fluff. What results is an inspiring tale that is heartwarming and fun, yet daring and profound, as it encompasses universal themes and emotions.

The solid, well thought-out script was penned by none other than Song Hye-jin, whose work includes the TV drama "My Sweet Seoul" and film "My Wife Got Married".

In theaters June 23. Runs 98 minutes. All ages admitted. Distributed by A1 Entertainment.

Three-and-a-half out of four stars.

"'Green' spearheads Korean animations"
by HanCinema is licensed under a Creative Commons Attribution-Share Alike 3.0 Unported License.
Based on a work from this source