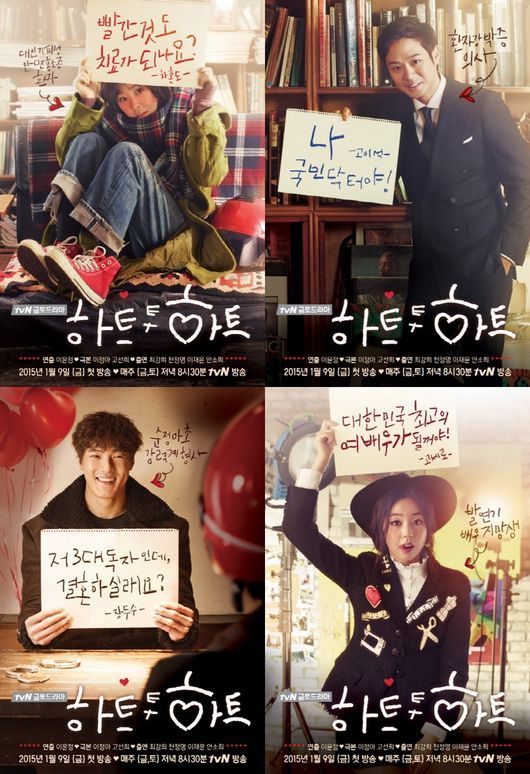 Four different posters for each of the four characters for tvN drama, "Heart to Heart" were released on December 26th.

In the first poster, Choi Kang-hee is holding a sign saying, "Can you even cure red thing?", while she is shyly sticking out her blushed face under the sign. Choi Kang-hee wearing plain clothes and crawling up expresses her character, Cha Hong-do well, who suffers from facial blushing due to social anxiety disorder.

Chun Jung-myung who took on the role as a prominent psychiatrist, Go Yi-seok has a confident look on his face and is gazing into camera. The short caption on the poster says 'Doctor obsessed with patient' creates curiosity about what it actually means and how each character will develop the story.

Lee Jae-yoon smiling with gentle eyes in his poster also looks interesting. He is holding a sign saying, 'I am a third sole son through family line. Would you marry me?', while he seems to be looking at someone. On the opposite side, you can see a dim image of Cha Hong-do who always wears a helmet to cover her blushed face.

Ahn So-hee, who took on the role as Go Se-ro, a daughter from an affluent family looks cute and cheerful. While she has everything, the only thing she lacks is an artistic talent. The sign she is holding says 'I am going to be the best actress in Korea', however the caption on the poster says 'A wannabe actress with awful acting skills'.

"Heart to Heart" is a romantic comedy about a psychiatrist, Go Yi-seok, who should be the center of attention, and Cha Hong-do a shy girl, who would almost die if she receives attention because of her facial blushing due to social anxiety disorder.

"'Heart to Heart' Character posters released for Choi Kang-hee Chun Jung-myung Ahn So-hee and Lee Jae-yoon"
by HanCinema is licensed under a Creative Commons Attribution-Share Alike 3.0 Unported License.
Based on a work from this source