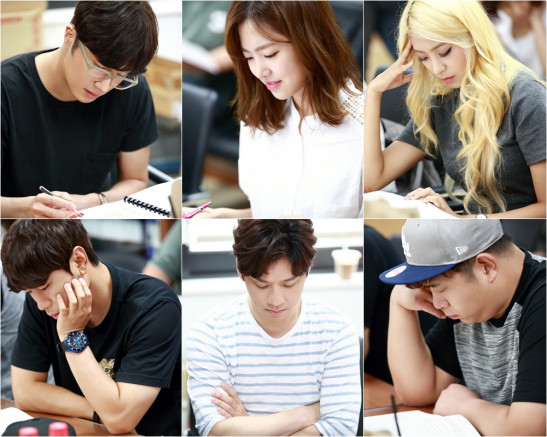 The script table reading for the web drama "High-end Crush" was revealed to the public.

On the 27th, the powers behind the joint Korean-Chinese web drama "High-end Crush" made public a still photo of the table read conducted at Kim Jong-hak productions. A stellar cast composed of Jung Il-woo, Jin Se-yeon, Yoon Bora, Lee Si-eon, Jung Sang-hoon, Moon Se-yoon, and a like were at the event.

The director Ji Yeong-soo gave a short but meaningful speech to the attendees saying "Since we are set to film in very uncomfortable weather, let's all be considerate to each other while filming",

Even though this was their first table reading, the actors instantly developed a rhythm boosting the anticipation for the show. Jung Il-woo, who plays the "star maker" head of a talent agency, had an intense expression on his face while exchanging lines with Jung Sang-hoon or Jin Se-yeon.

Lee Si-eon tried adlibbing his dialogue while Jung Sang-hoon, who is on "SNL Korea", actively used props as if he was performing live. Moon Se-yoon, on the other hand, approach the read with a high degree of control which also got a good laugh.

According to the production company behind "High-end Crush", the cast's chemistry and realistic acting were even better than expected. "All throughout the table reading, the actors came so prepared it felt like we were actually filming. We are going to give the show our utmost in order to make the show as high quality as the title of the show entails".

"High-end Crush" will be made available to the public in Korean and Chinese markets sometime in October.

"'High-end Crush' Jung Il-woo & Jin Se-yeon, Great chemistry even at the first table reading"
by HanCinema is licensed under a Creative Commons Attribution-Share Alike 3.0 Unported License.
Based on a work from this source