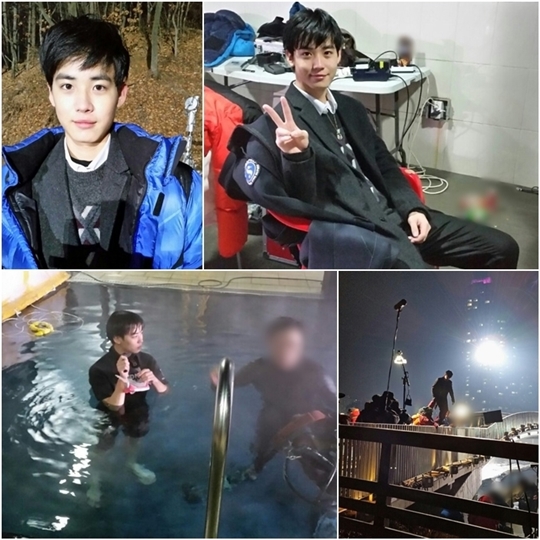 Still images of child actor Choi Soo-han on the set have been released.

On January 20th, his agency, Group TI said through their official Facebook, "We are happy to release the still images of Choi Soo-han on the set. His passionate acting performance shines even in the cold weather, on dizzy guardrails, and in the water! Although it's tough, it's fun. Smile!" Along with the comment, they released several still images.

In the images, Choi Soo-han looks concentrating on his acting in the water and on the guardrails supported by safety wire and staffs while he is still smiling brightly.

Choi Soo-han appeared in SBS drama, 'Hyde, Jekyll and I' and showed an impressive acting performance for his role of Hyun Bin's childhood, although his portion in the drama was not long.

Choi Soo-han talked about his acting, "I'm the happiest person in the world when I am on the set although it's tough sometimes. I am not going to stop as a child actor. I will work harder to become a successful adult actor

"'Hyde, Jekyll and I' Child actor Choi Soo-han plays Hyun Bin's childhood "
by HanCinema is licensed under a Creative Commons Attribution-Share Alike 3.0 Unported License.
Based on a work from this source