'Incomplete Life' Sales Team 3 in their group T-shirts, Jang Geu-rae is Our Kid 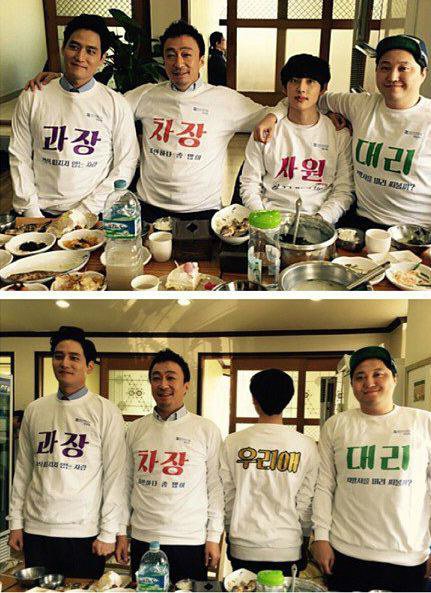 In one of the photos uploaded on Park Hae-joon's fan club website, it showed the Sales Team 3 in their group T-shirts in a restaurant. The actors from 'Incomplete Life" in the photo wore shirts imprinted Chajang (Deputy general manager), Gwajang (Manager), Deari (Assistant manager), and Sawon (Staff) on each one's.

Cheon Gwan-woong (Park Hae-joon), Oh Sang-sik (Lee Sung-min), Jang Geu-rae (Im Si-wan), and Kim Dong-sik (Kim Dae-myung) who always complete their tasks with a great team work in the drama matched the image as one team in the photo.

Particularly, on the back of the Im Si-wan's shirt, it says Our Kid. In the first episodes of the drama, Jang Geu-rae had to endure the difficulties working as an intern in adapting himself to the work place. When he was scolded for such mediocre object as a glue stick, Oh Sang-sik called Jang Geu-rae Our Kid and took him as one of their team. Because of this, the imprinted Our Kid on the back of Im Si-wan's shirt warms up viewers' hearts.

The last episode of "Incomplete Life" will be broadcasted on December 20th.

"'Incomplete Life' Sales Team 3 in their group T-shirts, Jang Geu-rae is Our Kid"
by HanCinema is licensed under a Creative Commons Attribution-Share Alike 3.0 Unported License.
Based on a work from this source