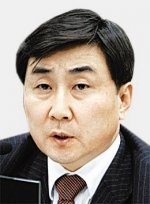 The Seoul Prosecutor detective department 4 (head Park Cheol) will investigate MP Lee Jong-geol (picture) as the accused for defamation by the Chosun Times, relating to the 'Jang Ja-yeon list'. The Chosun Times filed a lawsuit for defamation against MP Lee, who once mentioned at a National Assembly "There is a statement saying in Jang's letter that she served a high ranking officer from the Chosun Times". It also sued the head of the Social Democratic and Labor Party, Lee Jeong-hee, for mentioning the specific name of the high ranking officer in MBC's "100-Minute Debate". The prosecutors will decide on penalty charges after investigating the truth about these statements. It was conveyed that the prosecutors have also summoned Lee several times but he never responded.

"'Jang Ja-yeon list' lawsuit... Member of parliament Lee Jong-geol to be summoned tomorrow"
by HanCinema is licensed under a Creative Commons Attribution-Share Alike 3.0 Unported License.
Based on a work from this source