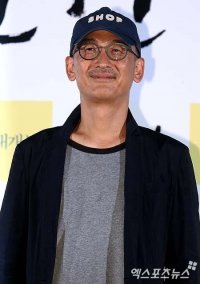 Director Lee Joon-ik of "The King and Clown" and "Radio Star" fame will make his debut as an artist.

Lee Joon-ik will be opening the Kuma Gallery on the 5th, a small gallery located opposite the Constitutional Court of Korea in Jongno-ku. In celebration of the gallery's opening, there will be a 5-artist exhibit entitled "Life is Suddenly" displaying works by Park Bul-ddong, Cho Hoon, Joo In-kyung, and Hwang Hyun-ho.

The Kuma gallery opening is a significant event for director Lee, as well as for his daughter Lee Da-yeon, who will be chief executive of the gallery.

"Kuma" is actually Lee Joon-ik's nickname. "It means 'bring down mountains to make plains' and it's an expression from a life motto of mine which is similar to the famous 'Just do it' motto", he explained, laughing.

The director dropped out of the arts school at Sejong University and made his way into the movie industry after starting in movie advertisements. He will be adding four of his own art pieces at the gallery opening which include "Lead a Good Life" (ink on hanji, 1984), "Confession is also Habit" (sculpture, 2005), and two others created after he finished filming the movie, "You are Far Away".

Director Lee Joon-ik made sure to add that "Kuma gallery will be showing a lot of rising talent, as well. We plan to discover new artists, introduce them, and help them put their work on the market".