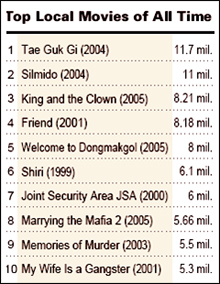 "The King and the Clown", a film about a notorious tyrant and his court jester in the Choson Kingdom, hit the 8-million-viewer mark during the Lunar New Year holidays, becoming the third most successful film in South Korean movie history.

Showing on 397 screens nationwide, the film pulled in more than 8.2 million moviegoers in 33 days since its opening on Dec. 29, including 2.43 million viewers on 92 screens in Seoul alone.

The film, based on the acclaimed play "Yi", applies a fictional twist to historic episodes and characters such as tyrant King Yonsan, his concubine Chang Noksu and court jester Kong-gil.

The film snatched third place on the all-time box office list from Friend, which was seen by 8.18 million viewers. However, the film has not exceeded a total of 2.68 million Seoul viewers for Friend.

The film is chasing "Taegukgi: the Brotherhood of War" and "Silmido", the two most successful films ever with 11.74 million and 11.08 million viewers respectively. The former surpassed the 10-million-mark in 39 days while the latter needed 58 days to do so.

There is a rising interest whether the film will join the 11-million-viewer club.

"If the current trend continues, the film is expected to greet 10 million viewers in two or three weeks", said a public relations official at Filmmarkerters, the film's production company.

Rounding out the top five all-time box list is "Welcome to Dongmakgol", which was seen by 8 million viewers when released last year.

"'King and the Clown' Hits 8 Million Viewers"
by HanCinema is licensed under a Creative Commons Attribution-Share Alike 3.0 Unported License.
Based on a work from this source