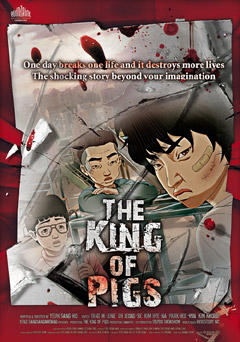 Yeon Sang-ho's animated feature film "King of Pigs" has been invited to Cannes next month to feature at a special screening of the festival's Directors' Fortnight.

This is the first time that a Korean feature animation has ever been included in the lineup. This automatically puts Yeun on the list of candidates for the Golden Camera Award, which is given to the best debut feature film presented at one of the Cannes' selections.

The film tells the story of a man who kills his wife after he fails in business. He then looks back on his past by visiting his friend from middle school. The thriller drew over 20,000 viewers in Korea when it was released in December.

"'King of Pigs' Animation Invited to Cannes"
by HanCinema is licensed under a Creative Commons Attribution-Share Alike 3.0 Unported License.
Based on a work from this source