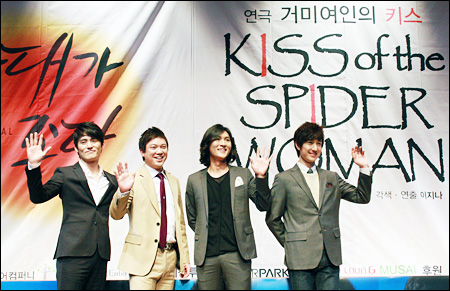 Actors pose at a press conference for the play "Kiss of the Spider Woman", which will be staged from Feb. 11 to April 24 at Art One Theater in Daehangno. / Courtesy of Aga Company

A Korean version of "Kiss of the Spider Woman", a theatrical adaptation of Argentine playwright Manuel Puig's novel, will take to the stage from Feb. 11 to April 24.

Set in a cell in Buenos Aires in 1976, the play revolves around two inmates _ the revolutionary Valentin and homosexual Molina. The play has sparked controversy over the relationship between the two main characters, but it has been widely produced in film and musical form. The musical version swept seven Tony Awards in 1992, receiving rave reviews both from critics and fans.

Lee Ji-na directs the Korean adaptation. She has built her reputation with the play "The Vagina Monologues" and musicals "Hedwig and the Angry Inch" and "Gwanghwanmun Yeonga". "I will create new characters suited to each actor", said Lee. 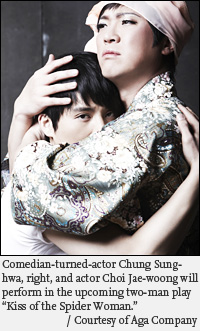 For the role of Molina, comedian-turned-actor Jung Sung-hwa, who is actively engaged in musical productions, will depict the romantic homosexual. Jeong has shone in his roles in "Man of La Mancha", "All Shook Up", "Radio Star" and recently " Hero " with his strong baritone vocals.

Rising musical star Park Eun-tae will alternate the role of Molina with Jeong. The play is Park's debut work. "I couldn't sleep because I worried about my first play. I will try hard not to make this homosexual role just gossip", he said. Park who recently drew attention in Austria for his performance in a musical gala concert there, also performed in musical productions such as "Notre Dame de Paris" and "Mozart!"

Actors Choi Jae-woong and Kim Seung-dae will alternate the role of Valentin, a guerilla prisoner. Choi who starred in the musical "Hedwig and the Angry Inch" also showed confidence in his character.

The play is the seventh of the Aga Company's play series project "I Love the Stage" which was launched last year. The Aga Company is presenting eight plays over nine months ― "Fool for Love", "Closer", "True West", "Proof", "Art", "The Bold Soprano", "Kiss of the Spider Woman" and "Three Days of Rain". The festival aims to boost small works and develop the local theater culture with star-studded casts to help audiences get better acquainted with the stage. The project is following in the footsteps of "Yeongeuk Yeoljeon" (Best Play Series) that attracts big-name screen stars to the stage initiated by actor-turned-programmer Cho Jae-hyun. The company is creating a new production trend by collaborating with the entertainment management company Namu Actors (Moon Geun-young, Kim Hyo-jin and Park Gun-hyung) and CJ Entertainment.

"'Kiss of Spider Woman' ready to lure audience "
by HanCinema is licensed under a Creative Commons Attribution-Share Alike 3.0 Unported License.
Based on a work from this source