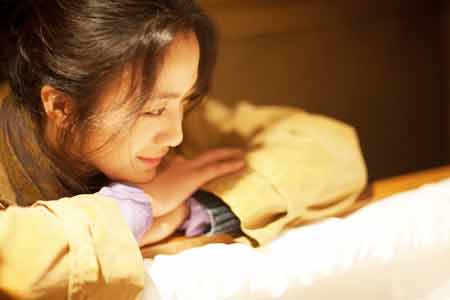 Heart-stopping and transcending sentimentality, Kim Tae-yong's "Late Autumn - 2010" is a remake with a greater purpose than simply pairing superstars in a new setting.

The Hyun Bin - Tang Wei vehicle is the fourth retelling of Lee Man-hee-I's 1966 "Full Autumn", which itself is based on a novel. Taking the story to Seattle heightens the feeling of urban alienation and the urgency of an unexpected romance, as two of Asia's biggest stars become socially outcast ethnic minorities. The film was perhaps unjustly excluded from the Berlinale's competition pool - though it will vie for the top prize at the Fribourgh Film Festival next month.

While serving her seventh year for killing her violent husband, Anna (Tang, the unforgettable heroine of Ang Lee's "Lust, Caution") heads to Seattle to attend her mother's funeral on a 72-hour parole - "the first compassionate release ever granted a murderer", one of her relatives reminds her, before another reprimands his insensitivity.

But having grown accustomed to being called Inmate No. 2537, she feels at a loss to see how much the world outside bars has changed. Little children - apparently her nieces and nephews - return curious stares; an old flame is now happily married but still makes her heart flutter with his causal remarks; and her own brother is preoccupied with the inheritance, though their mother has not yet been buried.

She finds solace in the least expected of places - in a complete stranger with questionable motives. Hoon ("Come Rain Come Shine" heartthrob Hyeon), a Korean immigrant who makes a living as a callboy, chances upon Anna and makes it a point to please her, no questions asked. "Hoon appears before Anna like an angel and shines a ray of warmth on her difficult life", Tang told reporters in Seoul last Thursday following the local press preview.

Unlike our chained down protagonist, Hoon is on the perennial run, attending to clients while being chased by one of these women's jealous husbands. In the meantime, however, he takes an interest in Anna - the first customer he isn't able to satisfy - and the curiosity turns into something more. It's a shocking revelation for someone who had been selling love one night at a time - a luxury he dares not seek to give or receive.

"Hoon seems cheerful on the outside, and his job requires him to maintain such a facade. Making others happy consoles him somewhat but at the same time deepens his own pain", Hyeon said.

The actors bring a fine balance to the emotionally dense narrative, with Tang expressing more with her silence (or the occasional rambling monologues in Chinese), and Hyeon providing the dynamism and unwarranted humor. "The script was interesting, because, despite being dialogue-heavy, there was much room for interpretation, and the tone of the film could easily change depending on the approach", said Hyeon.

The director brings a subtle, nuanced lyricism to the story, which maintains a strong arthouse appeal, complete with elements of fantasy, while not alienating general audiences. Some of the most intense moments unravel quite unexpectedly, such as the funeral scene which incisively portrays a deep divide that exists within a family and an individual.

In the end, "Late Autumn - 2010" is a simple story of girl meets boy - but sometimes the lives we lead as older children come with more strings attached than we wish. Anna is destined to return behind bars in a few hours' time while Hoon's hunters trail all too near.

"'Late Autumn - 2010', a modern fairytale for adults"
by HanCinema is licensed under a Creative Commons Attribution-Share Alike 3.0 Unported License.
Based on a work from this source