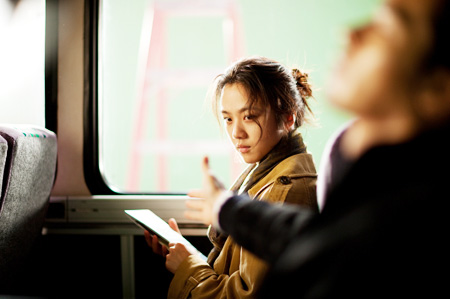 Lee Chang-dong's "Poetry" won the top award, the Regard d'Or, at the 25th Fribourg International Film Festival while Kim Tae-yong's "Late Autumn - 2010" picked up two prizes at the Swiss event.

Co-starring China's Tang Wei and South Korea's Hyun Bin, "Late Autumn - 2010" won the Special Mention of the Jury of the International Federation of Film Societies and the Ex-Change Award. The latter is a prize selected by a special jury of youths.

The remake of the 1966 Lee Man-hee-I classic competed in Fribourg's competition section even though it made its European premiere at the Berlin Film Festival last month. Fribourg's jury praised "Late Autumn - 2010" as "a beautiful film that delicately portrays the process of two people opening their hearts to each other, transcending language".

But the film lost out to another Korean contender, "Poetry", a Cannes-winning film that also won prizes for Best Director and Best Screenplay at Hong Kong's Asian Film Awards last week.

The Fribourg Festival is one of Europe's most eclectic cinema events known for introducing international works to the region, particularly those from Latin American and Asian countries.

In past editions, it has invited numerous Korean films including "Breathless", "Memories of Murder", "Sympathy for Lady Vengeance", "3-Iron" and "The Way Home".

"'Late Autumn - 2010' picks up awards at Fribourg Fest"
by HanCinema is licensed under a Creative Commons Attribution-Share Alike 3.0 Unported License.
Based on a work from this source