'Mafia', Out of Fashion, Business 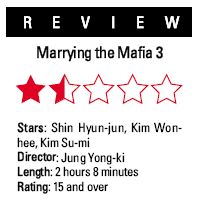 Let's say the original idea of an intelligent yet timid man marrying a woman from the family of a criminal gang in "Marrying the Mafia" was cute; and that its sequel, in which the gang's family has a star prosecutor as a daughter-in-law who is out to rid the nation of gangsters, was interesting enough.
But compared to them, this new installment "Marrying the Mafia III" has few redeeming factors, relying on shabby jokes and repetitive formulas from the earlier movies, with its one and only goal to make the audience laugh simply failing.

The members from the second installment teamed up once again for the new film, including director Jeong Yong-ki and actors Shin Hyun-joon, Kim Won-hee and Kim Soo-mi, who achieved unexpected success in that movie, attracting over 6 million moviegoers around this time last year. But it seems that they may have simply said, "Let's do it again", without any plan.

The story, which continues from the second installment, is simple.

It revolves around Mrs. Hong's (played by Kim Soo-mi) family, who launches a new business of setting up a kimchi manufacturing company after putting an end to their crime-related dirty business.
The new business is a huge success due to Mrs. Hong's talent in food, and her three sons and their wives help her to write a new chapter for their family history, learning what an ordinary man's life is like.

But the Hongs meet a new crisis when former prosecutor Bong, imprisoned for manipulating evidences in the second installment, is released and prepares for a revenge on the Hongs, who largely contributed to his conviction.

Bong, along with the help of another criminal gang come up with an idea to pay back the Hongs. He poisons the products from Hong's brand which causes the family to be on the verge of going out of business.

But as Bong's simple plot succeeds, the Hongs easily tackle the crisis in the end. And to fill the empty space in the flimsy story, much of the film is devoted to scenes of recollection of each character's past.

In such scenes, characters wear a silly wig and out of fashion clothes, and sing silly songs and dance.

A little bit of this light-heatedness might have worked, but it is overdone. With little connection to the main story, it rather detracts from the development of the flimsy story.

Overall, the film smacks of a short trendy drama in a television talk show, riding on the success of a rising star to say and do silly things, just to entertain viewers. But the two-hour running time is too long for such a purpose.

"'Mafia', Out of Fashion, Business"
by HanCinema is licensed under a Creative Commons Attribution-Share Alike 3.0 Unported License.
Based on a work from this source