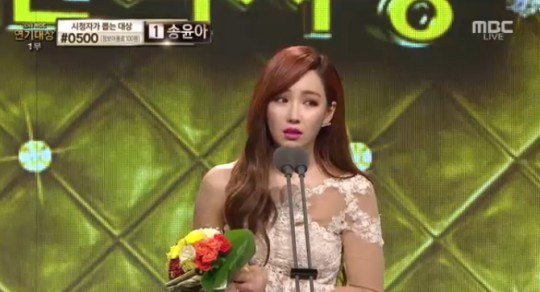 Lee Yu-ri was honored to receive the Grand Award over the strong, prominent competitors, Song Yoon-ah for 'Mama - Nothing to Fear' and Oh Yeon-seo for 'Jang Bo-ri Is Here!'

For her acceptance speech, she said "I would not have been able to bring up the Yeon Min-jeong character into life without the excellent screenplay, production and Oh Yeon-seo. I'd like to give huge thanks to our viewers as well. Popularity comes and goes. Like other actors and actress, I worry about whether or not I would be cast. I'd like to also thank our senior actresses, Geum Bo-ra and Kim Hye-ok for helping me supported by viewers even though the role was a mean character".

Lee Yu-ri continued with teary eyes "I hope I will come back to meet viewers with a good role. I have to let the Yeon Min-jeong character go of me now. Thank you so very much for loving me this year".

Netizens said "Lee Yu-ri, congratulations on the Grand Award. You totally deserve the award", "'Jang Bo-ri Is Here!' was for Yeon Min-jeong', 'Grand Award for Lee Yu-ri, who deserves the award'. 'Congratulations! Best mean girl!! You showed the most impressive performance" and so on.