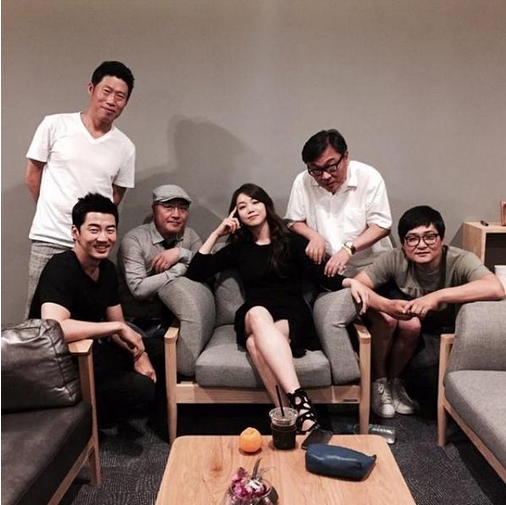 Actress Kim Ok-vin revealed a photo she had taken along with the cast of 'Minority Opinion'.

On June 19th, Kim Ok-vin wrote on her Twitter account, "Give me some arm massage" along with a photo uploaded.

The revealed photo shows Yoon Kye-sang, Yoo Hae-jin, Lee Kyung-young, Kim Ok-vin, Kim Eui-sung, and even director Lee Hae-yeong. Kim Ok-vin in the haughty pose is receiving massage from Kim Eui-sung. The looks on each actor's face in the photo prove the strong team work among the cast of 'Minority Opinion'.

Netizens said, "'Minority Opinion', I'm anticipating", "Ok-bin, your face is radiant" and so on.

Kim Ok-vin's 'Minority Opinion' is to be released on June 24th.

"'Minority Opinion' views actress Kim Ok-vin poses haughtily with big-name actors in a staged photo"
by HanCinema is licensed under a Creative Commons Attribution-Share Alike 3.0 Unported License.
Based on a work from this source