'Miracle in Cell No. 7' Draws Over 10 Million Viewers 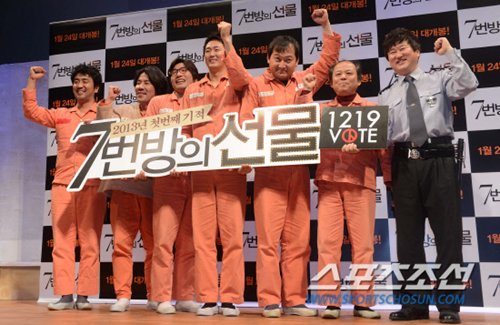 "Miracle in Cell No. 7" broke the 10 million mark for ticket sales on Saturday, becoming the eighth Korean movie to do so, according to the Korean Film Council.

The feat, which comes 32 days after release, was widely expected as the film hit the 1 million mark just four days after hitting theaters and the 5 million mark in 16 days.

Previous hits that drew over 10 million cinemagoers include "Silmido", "Taegukgi: The Brotherhood of War", "The King and the Clown", "The Host", "Haeundae", "The Thieves" and "Masquerade".

The film is about a group of prisoners who embark on a mission to help a new inmate -- a mentally disabled man -- reunite with his 7-year-old daughter.

"'Miracle in Cell No. 7' Draws Over 10 Million Viewers"
by HanCinema is licensed under a Creative Commons Attribution-Share Alike 3.0 Unported License.
Based on a work from this source