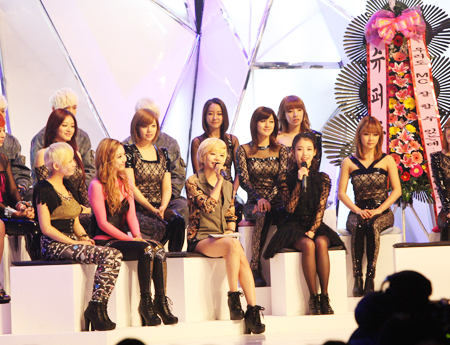 Sunny from Girls' Generation, center in front row, talks with IU, on her left, at the filming of the first episode of "Music Island" Wednesday. Other guests on the show included Sunny Hill, Rainbow and B.A.P. (Courtesy of SBS Contents)

JEJU - With Sunny from Girls' Generation as host on a stage on Jeju Island, "Music Island", an upcoming K-pop program, has many grandiose objectives. One is to "prove that K-pop idols can sing", said Kim Chang-woo, the SBS MTV director in charge of the new show.

"'Music Island' will offer a genuine musical experience to the viewers, much like a mini-concert, where four to five artists will fly to Jeju Island for every episode to perform together and share their stories", said Kim at a press conference at the Jeju Grand Hotel on Tuesday.

The filming of the first two episodes at Tamna Hall of the International Convention Center in Seogwipo, on the same day showed that perhaps the noble ideas are a bit of a stretch given the packed schedule and vocal capabilities of K-pop stars.

The venue and format is unique among K-pop shows. The guest stars on the first episode - IU, Jung Yup, Sunny Hill, B.A.P, and Rainbow - sat with Sunny at the right of the stage and stayed until the end. On other music programs such as "Ingi-gayo" on SBS and "M!Countdown" on Mnet, artists leave after their performance. Nearly 1,000 spectators took their seats at Tamna Hall, unlike other shows where people stand around small stages.

Sunny skillfully led the small talk between each act. This was the first time for her to host singlehandedly, but she was poised and casually interacted with the audience. She predictably asked the guests about their newest albums and future plans. However, much of the conversation often appeared unplanned fillers, with questions such as who the artists are closest to on the music scene.

Female solo singer IU kicked off the show with "You And I". While chatting with Sunny, she responded to the crowd's requests to sing parts of her famous tracks like "Good Day" and "Marshmallow". Ballad singer Jung Yup performed the title track from his latest album "I Didn't Know" as well as his most famous number "Nothing Better". Armed with great vocals, the two musicians were perfect for the program.

This did not last as things headed downhill when the idol stars performed renditions of their own songs by the music director of "Music Island", Eco Bridge. Every week the show promises to offer such special performances in addition to singers' standard versions of their hits. The crowd went silent when Rainbow undertook a rock version of their dance track "Maha". The seven members could not hit the notes let alone dance. The audience could barely make out the lyrics, and the singers appeared disoriented with the clashing choreography. 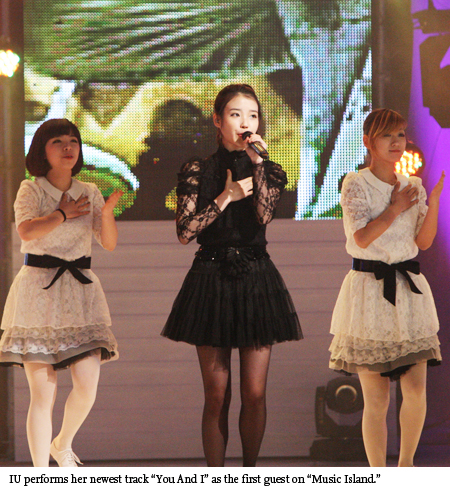 At the end of the performance, Woo-ri, the rapper of the ensemble, stood in the middle of the stage looking lost while others were posing.

Sunny Hill, a four-member group, did not fare any better. The music director had added a jazzy twist to their debut ballad "Ring Tone" from 2007. The vocals were tenuous to begin with and attempts to add flavor to the track made the singers sound off-beat.

Nonetheless, the young residents of Jeju Island did not complain. The convention hall was packed from noon with people waiting to get in. After the show, the audience, mostly high school students, came out flushed from their first up-close encounter with the stars. "We were excited that (the show) will bring artists to Jeju. I came to see IU but I was very impressed with B.A.P". said Kim Ah-ram, a local high school student.

But not as many appreciated the attempts to offer something new. Kim Yi-seul, a high school student from the area, said "I didn't think it was that different from other music shows. The sound system was sub-par and the different versions of the songs were pretty bad. It was embarrassing because the artists couldn't sing".

Many pointed out the talk show component as their favorite part. Yang Chang-woo, 17, and his friends joined the queue to get in at 6 a.m. "The show was worth the wait! I came to see IU, and I was really happy that she didn't just disappear after her act but sat with other artists and talked", said Yang.

"Music Island" will utilize the global MTV network and will be aired in eight Asian counties, including Japan, China, and Singapore. The show will feature musicians from overseas and collaborative performances with K-pop stars. No foreign artists will perform in the first two episodes and as yet no specific plans for their appearing have been made.

The first episode will air on Feb. 28.

"'Music Island' to push limits of K-pop"
by HanCinema is licensed under a Creative Commons Attribution-Share Alike 3.0 Unported License.
Based on a work from this source