'Nameless Gangster' Emerging as Hottest Korean Movie of the Year 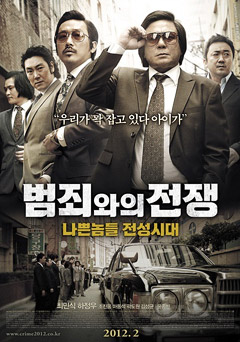 "Nameless Gangster" has attracted over 4 million spectators in just 26 days of its release, emerging as the first film to sell so many tickets in such a short time this year. It achieved the feat on Monday.

The film about gangsters in Busan in the 1980s drew 1 million moviegoers in four days, 2.5 million in 11 days, 3 million in 17 days and 3.5 million in 20 days. It also beat "Dancing Queen" in terms of viewing numbers on Friday, and reclaimed the top spot last weekend at the expense of "Howling", which had kept a firm grip at the top of the local box office since it opened on Feb. 16.

The success of "Nameless Gangster" is even more notable as it was achieved in February, considered the low season for movies, and is rated R, excluding younger viewers and families.

It is also being screened less frequently than other movies due to its long running time of 133 minutes, and has managed to lure moviegoers in the face of competition from Hollywood blockbusters with huge budgets and explosive action scenes, such as "Man on a Ledge" and "Underworld: Awakening".

The film won over critics and audiences with its credible yet entertaining plot and vivid characterizations of criminal elements in Korea's most attractive coastal city, led by the outstanding performance of Ha Jung-woo, who flaunts masculine charm as a gang boss.